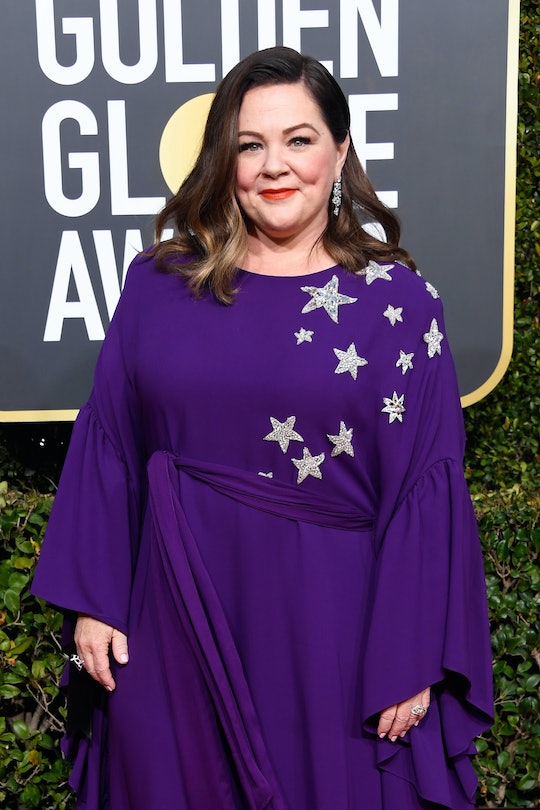 Everyone knows the Golden Globes as that award show where the actors are fed dinner. But for some celebs, the ceremony's offerings (which are typically served before the broadcast begins) are not quite enough to keep them satisfied throughout the evening. So for that reason, Melissa McCarthy pulled the ultimate mom move at the Golden Globes — and the hungry guests surely appreciated her for it.

As Variety reported Sunday evening, McCarthy smuggled and passed out 40 ham and cheese sandwiches to hungry Golden Globes attendees. “I’ve been handing them out to everyone,” McCarthy said at the event, as Variety reported. “Next year, I’m bringing hot dogs.” (Hopefully next year's hot dogs include a few vegan- and kosher-friendly options!)

McCarthy's husband, Ben Falcone, confirmed that he was an accessory in this crime in an Instagram post. "These are the sandwiches that Mooch smuggled into the Golden Globes," he captioned a shot of sandwiches along with an ice pack in a tote bag. "We brought 40, left with 2. We left with some happy customers," he added.

Can we all agree that keeping snacks in your purse is a total mom move? But keeping 40 sandwiches in your purse? That's a mom-of-the-year move. McCarthy is a mom to two children, Vivian and Georgette, so it's really no surprise that this idea came to her.

A label on the sandwiches reads Joan's on Third, which a quick Google search reveals is an "L.A. foodie institution" with two locations in Los Angeles, according to the establishment's website. I'm a lil' freak who browsed the website to see how much the sandwiches cost, and if my estimations are correct and it's the Ficele sandwich ("with fromage d’affinois and apricot glazed ham"), they cost $7.95 each. That's $318 total.

McCarthy's stealth sandwich-sneaking seems to have went over well with her fellow Golden Globes audience members.

According to Variety, Jessica Chastain wanted to know: “How did she get them in here?” That said, Chastain clearly didn't mind the mystery, because she thought the idea was genius. “But it’s a good idea because by the time you get into the ballroom dinner has already been served, and you’re always so hungry,” the actress added, according to Variety.

And as PureWow noted, Golden Globes viewers may have noticed actress Olivia Colman, who won the award for Best Actress in a comedy or musical film for The Favourite, give a shoutout to McCarthy's stunt during her acceptance speech. After taking the stage and declaring she was going to try not to cry on stage, she said, "Hi! Thank you for the sandwiches," presumably in McCarthy's direction, to which the audience chuckled. "Amazing! Thank you," she added, before launching into her speech.

McCarthy had quite the night at Golden Globes, even though she didn't take home an award. (She was nominated for Best Performance by an Actress in a Motion Picture — Drama for her role in, Can You Ever Forgive Me?) Before heading to the awards show, the Gilmore Girls actress shared a few photos to Instagram of her getting-ready process. One shot involved a sheet mask on her face, another showed a team of three people (one of whom was her husband) getting her ready, and another was a sweet snapshot of McCarthy and Falcone.

And in a photo that Falcone shared, taken in the backseat of their car, the couple excitedly brandished plastic cups filled with what looks like beer or champagne and a pair of tickets to the Golden Globes.

Stay tuned for the 2020 Golden Globes — I have a feeling McCarthy will be going all out with the hot dogs.