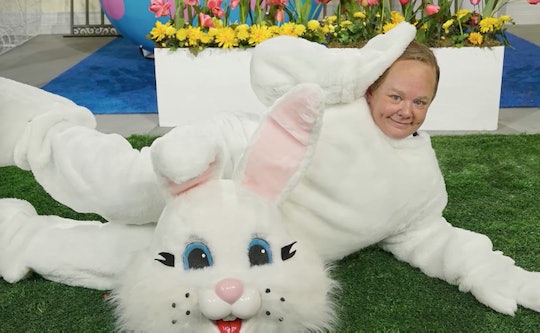 In case you hadn't heard, Sean Spicer has resigned from his post as White House press secretary as of Friday morning. The news comes as a bit of a surprise, though it's not exactly shocking since he's been absent from several press briefings, allowing Deputy Press Secretary Sarah Huckabee Sanders to take to the podium in recent weeks. And because actress Melissa McCarthy did such an excellent job portraying the much-criticized press secretary on several episodes of Saturday Night Live last season, people are wondering whether they will see Spicey grace late-night screens ever again. Now, a lot of people are curious whether McCarthy will speak up, tweet, or keep quiet about the latest news. Melissa McCarthy's reaction to Sean Spicer's resignation is exactly what fans need right now, but they might have to wait a little while to get it.

In the wake of this news, it's hard not to think of McCarthy's take on Spicer on SNL over the past few months, what with, as Business Insider called them, her "many manic impressions" of the poor guy. Some of his more questionable appearances and quotes might be pretty famous, but it's arguably McCarthy who made him infamous. However, it sounds like McCarthy is on vacation at the moment. For all we know, she hasn't even heard the news about him.

As reported on TODAY, McCarthy was recently spotted on vacation in Greece — by none other than her old Gilmore Girls co-star, Yanic Truesdale, who played a sort of "frenemy" of hers on the show. So for all we know, she's lounging on a beach somewhere, and has no idea that Spicey is out of the White House.

But fans of McCarthy and her portrayal of Spicer are likely very interested in what she thinks of the latest development. As Vanity Fair put it, the part will "live on as one of the sketch show's best-remembered impressions," and that's no small feat. But one person who likely won't remember the role fondly is Sean Spicer's White House boss, President Donald Trump himself.

According to another Vanity Fair piece, at one point, Spicer wanted to make light of the appearances McCarthy made on SNL, and even considered joking about it at a press conference. But Trump reportedly didn't like the idea, and vetoed it. Well, at least Spicer was willing to laugh at himself?

Now, however, several sources are saying Sarah Huckabee Sanders has been named the next White House press secretary, and according to Business Insider, Aidy Bryant played her in a previous skit on SNL featuring Spicer hiding in the bushes while she filled in for him during a press briefing. It would make sense if she continues to play the character in the future, but McCarthy's Spicer would be sorely missed.

But who's the say he won't pop up on the show again? Saturday Night Live finished its 42nd season on May 20, according to the International Business Times, but that doesn't mean it won't bring McCarthy as Spicer next season, even if only to act out her version of Spicer's resignation. As of right now, it's not totally clear when SNL's 43rd season will begin, but it'll be sometime in the fall, and that's a long time from now if they're trying to keep things current with the news they cover and relevant jokes the writers come up with.

In any case, McCarthy's impression of Spicer will live on in infamy. If nothing else, her appearances lambasting him on the late night comedy show are something to remember fondly from Spicer's stint as press secretary, which, for McCarthy and Spicey fans, ended all too soon.

More Like This
Jacinda Ardern No Longer Has “Enough In The Tank” & Moms Know Exactly What She Means
Sally Field Is The Ultimate Cool Mom Who Once Tried To Set Her Son Up With An Olympian
10 Great Podcasts That Will Keep Your Kids Entertained On Your Next Family Road Trip
Marie Kondo Gives Up Tidying Post-Kids, Sparking Joy For Moms Everywhere
What Parents Are Talking About — Delivered Straight To Your Inbox