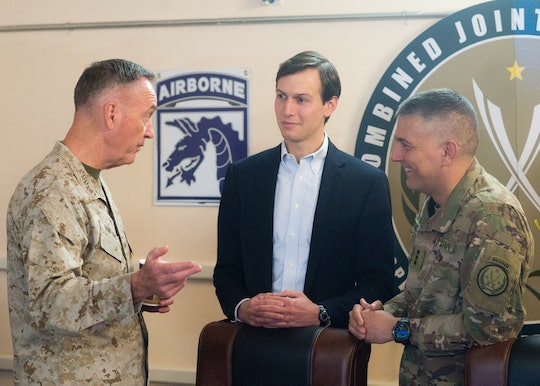 The Best Memes About Jared Kushner In Iraq

White House senior adviser Jared Kushner may have no actual political experience, but as an extremely well-liked and trusted ally (and son-in-law) of President Donald Trump, he's been entrusted with a number of important roles. In addition to overseeing Isreali-Palestinian relations and heading up the White House Office of American Innovation, according to CNN, Kushner was recently sent to Iraq to meet with Iraqi leaders and U.S. military officials. But while the official photos from his visit Monday surely weren't meant to be funny, the resulting memes about Jared Kushner in Iraq are something you definitely need to see if you could use a laugh.

Kushner gets a lot of flack for an awful lot of reasons: there's the popular argument that he was unfairly given his role due to the fact that he is married to the president's daughter, Ivanka, for example, and he's also often criticized for his own, already-privileged background. Though Kushner and his wife have built a business and real estate empire now worth more than $700 million, he actually began his career by taking over for his already-successful real estate developer father, Charles Kushner, after Charles was sent to jail in 2005 for tax evasion, witness tampering, and illegal campaign donations, and spent two years behind bars, according to NJ.com And that allegedly wasn't the first time he was given a leg-up by his dad: according to The New Yorker, Kushner was allegedly accepted to Harvard despite poor academic performance thanks to a $2.5 million donation his father made to the university. (Romper's request for comment regarding this claim was not immediately returned.)

Of course, none of that necessarily has anything to do with his actual skill level or ability, and if he does in fact turn out to be effective in his White House roles, then he'll have certainly proved the naysayers wrong. But one thing that definitely didn't help Kushner's "pampered rich boy" persona during his Iraq visit? His clothing choice. In the photos, Kushner can be seen wearing a button-down shirt, khakis and a sport coat while meeting with military personnel at the Qayyarah West Airfield — details that Twitter users promptly skewered him for in the most hilarious of way.

Most of the comments poked fun at Kushner for being dressed for a day at the country club:

While others ragged on him for trying to look cool:

Then there were the jokes about how out-of-his-element he appeared:

And a few about the fact that his name had been written on his vest:

Of course, as funny as it is to make fun of Kushner, the fact remains that he is actually in a very real position of influence in the White House, and as easy as it is to troll him, his actions and decisions can potentially have major ramifications for the entire country. Given that the Trump presidency has left many, many people feeling incredibly uneasy about the future, that's not exactly something that should be easily brushed aside.

At the same time though, seeing the memes of Kushner in Iraq are at least a way to have a laugh at a time when headlines are otherwise feeling totally heavy and pretty scary. Social media might be the worst sometimes, but when it came to Kushner's awkward blazer, Twitter totally nailed it.