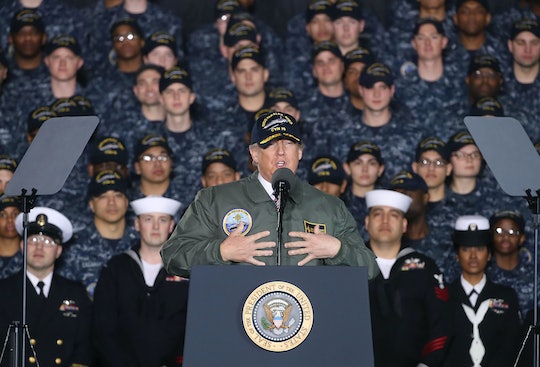 On Thursday afternoon, President Donald Trump stood aboard the U.S.S. Gerald Ford and spoke about boosting the U.S. military. There, in front of dozens of service members, Trump promised that Secretary of Defense James Mattis will lead "this great rebuilding of our military might." It's a funny proposition, considering he was standing on an over-budget aircraft carrier still under construction. Even funnier? The president's chosen attire. Of course, memes about Trump's green outfit began to pop up on Twitter right away. And those memes are everything you need right now.

For some reason, Trump decided to wear a green U.S. Navy jacket and black U.S. Navy hat while visiting the U.S.S. Ford, the first military ship in a new fleet of aircraft carrier being built at Huntington Ingalls Industries Inc. in Newport News, Virginia, according to Bloomberg. People on Twitter were quick to point out the similarities between Trump and some of our favorite characters from television and movies. Is the outfit an ode to Buster from "Arrested Development" ("Loose seal! Loose seal!")? Maybe he really likes "Captain America." Or was the president playing Top Gun with his buddies and wanted to go as Maverick?

The world may never know.

What we do know is Trump plans to keep his promise to "rebuild" a massive military that he once called "badly depleted" during his campaign, according to Quartz. During his speech, Trump promised to add $30 million to the U.S. defense budget this year, days after his administration announced that it would add $54 billion to military spending next year. This is without a sense of irony. According to the Stockholm International Peace Research Institute and the Peter G. Peterson Foundation, the United States already spends more than on its military than China, Saudi Arabia, Russia, the United Kingdom, India, France, and Japan — combined. But hey, another $84 million couldn't hurt, right? (Wrong.)

Trump's outfit is no doubt ridiculous. But it's important to remember that Trump is the same man who has insulted veterans in the past. He also received multiple draft deferments and hasn't served in the military a day in his life. Trump also used the death of Navy SEAL William "Ryan" Owens, who was killed during a failed counterterrorism mission in Yemen, to push his agenda during Tuesday's address to Congress, as Slate reported. Veterans and family of service members also took to Twitter to point out that Trump's outfit is insulting to people who actually served.

Laughing or not, insulted or not, let's make sure that Trump's outfit doesn't distract from his politics and policies that will harm the United States — and its soldiers, who risk their lives every day — in the long run.