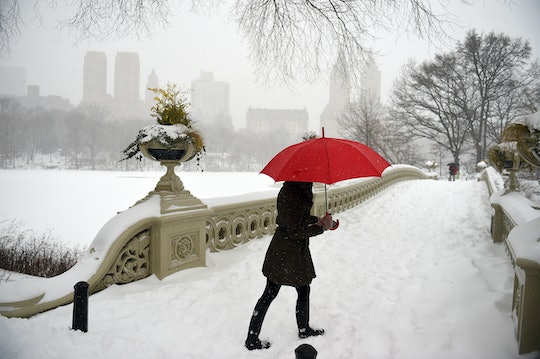 Memes About Winter Storm Stella Are Too Funny

A winter storm will hit the East Coast on Tuesday, and it's expected to be huge. But the biggest thing about this storm is shaping up not to be the snow itself but the storm's name: Stella. When people on social media found out the name of the storm, they had a snow day. Here are some memes about winter storm Stella.

Snowstorm Stella could drop from 12 to 18 inches of snow, with the peak of the storm coming between 6 a.m. and noon Tuesday, USA Today reported. Winds could potentially reach up to 40 miles per hour, and The National Weather Service has also warned of potential coastal flooding.

But the severity of the storm didn't stop people from making jokes about it, including the most obvious reaction anyone could have after finding out the name of the storm.

Let's just get this one out of the way: Stellaaaaa! People are flocking to social media to reference the iconic scene of Marlon Brando's character Stanley calling out the name of his wife Stella from the 1952 film A Street Car Named Desire. (For those who aren't familiar with the scene, here's a clip, courtesy of Turner Classic Movies). About 80 percent of the memes around the storm are based upon the Stella gag.

Some of the memes invoke parodies of the famous scene, including versions from Seinfeld and Modern Family:

The joke was even too hard to resist for George Takei:

And speaking of George Takei, only he could find a way to compare the storm to the other force that typically dominates the news cycle, President Donald Trump:

A few enterprising businesses are also using the storm to their advantage, including one pizzeria in Ohio offering a discount on Stella beer.

Several people also made fun of the severity of the storm:

In all seriousness, though, this storm could be huge.

Northeast New Jersey, southeast New York, and southern Connecticut are under blizzard warnings from The National Weather Service. The service has also placed winter storm warnings across Boston, Philadelphia, Baltimore and Washington D.C., among other parts of the Mid-Atlantic and the Northeast. "Nearly one in every three people in the U.S. are under a winter weather alert of some sort," CNN meteorologist Pedram Javaheri said. "This all comes after what seemed like it would be the year without a winter."

Public schools are closed in Boston, in New York City, and in other parts of the country. Several places are also issuing travel advisories, including New York City: “We’re preparing for a significant storm on Tuesday, and New Yorkers should also prepare for snow and dangerous road conditions,” Mayor Bill De Blasio said in a press release. “Besides the snow, it will be cold. We urge you to avoid unnecessary travel and help keep roads clear for Sanitation crews and first responders.”

So stay safe everyone, and don't go outside to fight the snow like Elsa unless you also have powers to control the snow. And since you'll be stuck indoors anyway, you can use the time to watch A Streetcar Named Desire.