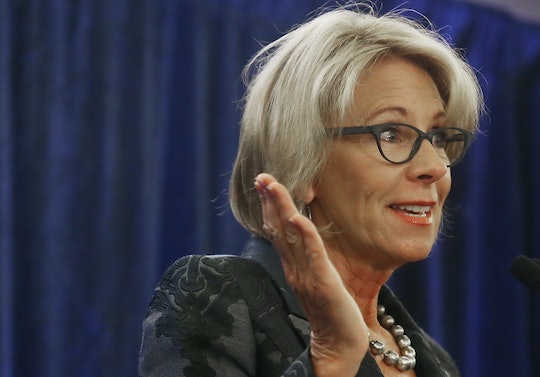 Speaking at a conference on Wednesday, U.S. Secretary of Education Betsy DeVos forged ahead in her quest to bring school choice to the forefront of policy discussion. A longtime advocate of the practice, which gives parents government vouchers so that they can send their kids to private school as opposed to public school, DeVos attempted to explain why she thinks parents ought to have the benefit of school choice. Memes and jokes about Betsy DeVos' Uber comment, wherein she tried to make ride-sharing services analogous to school choice, actually do a solid job of breaking down the problem with DeVos' overall philosophy.

DeVos' allegiance to school choice has made her a controversial figure in American politics since Trump tapped her for the role of Secretary of Education — a career move that did not have an auspicious beginning for DeVos. Her confirmation hearing produced several headline-making and ultimately meme-worthy quotes that didn't exactly lend themselves to creating an aura of confidence around DeVos' appointment. As the fumbles were largely attributed to her glaring lack of experience, many criticisms have not been unfounded. U.S. educators worry that her focus on school choice — a stance largely based in personal preference — will result in funding being diverted away from the public school system, which desperately needs it. On Wednesday, DeVos spoke at a conference at the school choice promoting nonprofit, Brookings Institution. In her remarks she justified her committment to school choice by saying that parents ought to have the right to make decisions about their children's educations, and that money should not be what stands in their way. She ultimately made school choice analogous to ride-sharing apps, according to The Washington Post:

How many of you got here today in an Uber, or Lyft, or another ridesharing service? Did you choose that because it was more convenient than hoping a taxi would drive by? Even if you didn’t use a ridesharing service, I’m sure most of you at least have the app on your phone. Just as the traditional taxi system revolted against ridesharing, so too does the education establishment feel threatened by the rise of school choice. In both cases, the entrenched status quo has resisted models that empower individuals. Nobody mandates that you take an Uber over a taxi, nor should they. But if you think ridesharing is the best option for you, the government shouldn’t get in your way. The truth is that in practice, people like having more options. They like being able to choose between Uber Pool, Uber X, Lyft Line, Lyft Plus, and many others. Or when it comes to taking a family trip, many like options such as Airbnb. We celebrate the benefits of choices in transportation and lodging. But doesn’t that pale in comparison to the importance of educating the future of our country? Why do we not allow parents to exercise that same right to choice in the education of their child?

As per usual, the internet weighed in on DeVos' comments and offered some searing commentary about not just the analogy itself, but the implications.

Further to the point, Chris Weller at Business Insider wrote an op-ed explaining why he felt DeVos' analogy was so far off base:

By comparing school choice to an ordinary consumer decision, DeVos and the Trump administration paint education as something like a business, which is susceptible to the usual market forces of consumer choice and innovation through competition.

Weller also spoke to Russ Whitehurst, who is a fellow at the Brookings Institution where DeVos spoke. Whitehurst pointed out that the majority of parents aren't educators, and they may have some idea about what options would work best for their child, but not every child. Even then, in the absence of guidance provided by state and federal systems, giving parents the choice about where to send their children to school — without giving them the tools they need to make that choice — could be terribly counterproductive.