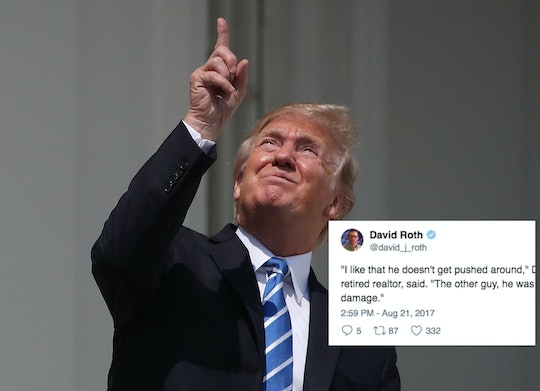 In case you haven't heard already, Trump is a big boy. Trump is such a big boy, in fact, that he decided to expose his 71-year-old eyeballs to an incredibly intense light that can cause permanent eye damage. Although Melania Trump decided to don a pair of shades for the occasion, Trump opted for a more au naturale, and literally blinding, experience. If you're wondering why anyone would ignore the warnings of countless doctors and scientists, you have to try to put yourself in Trump's shoes. For the past seven months, Trump's ability to lead has been under intense scrutiny, and he has felt pressure to send a message of strength and competence to the American people. He doesn't need climate experts or foreign policy experts. No way. Well, fear no more America — Trump just proved he's big and bad by getting into a staring match with a solar eclipse. Take that, Kim Jong Un.

That all being said, please enjoy these grade-A memes of Trump looking at the solar eclipse:

Well, I guess the upside here is that Trump won't be able to see the nuclear codes anymore. Thanks for saving America, solar eclipse — you're the official hero of 2017.

As for Trump's aides, they reportedly cautioned him to put on glasses in real time, a warning he chose not to heed until glasses were brought out to him. Trump has proved once again that he doesn't listen to anyone, even when it comes to potentially blinding himself. Big boys don't listen to aides, OK? The whole solar eclipse and blinding yourself thing is fake news, after all. Who knows, maybe scientists have joined the ranks of the dishonest media — anything is possible in this unbelievable world we live in.

Sigh. Did America really expect anything different here? Trump is literally that kid that will do the thing you told them not to do just because. Although it's disturbing to know that a man who believes he's impervious to blindness is leading America, at least it's entertaining. No matter what happens, America will always have its glorious, perfect, and hysterical memes.