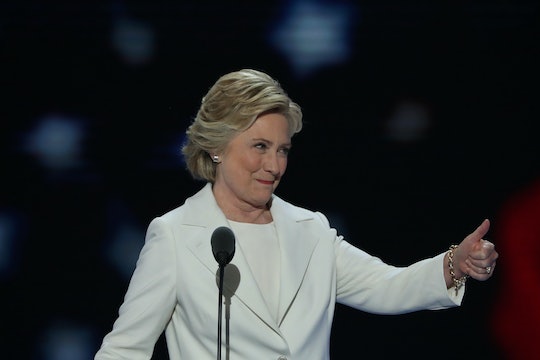 The 2016 Democratic National Convention came to a close on Thursday night with a rousing speech made by Democratic nominee Hillary Clinton. Her nomination is historic alone, but there were also some memorable lines from Hillary Clinton's DNC speech. It was all about the buildup, really. Not simply because it was a busy, starpowered week full of great speeches by her husband, her colleague President Obama, the First Lady, Sarah Silverman, Demi Lovato, and so many (I mean, really, so many speeches), but even on Thursday evening, there were musical performances by Katy Perry and an introduction by Chelsea Clinton. I mean, making an entrance to Katy Perry means your speech has to be badass.

She had appeared earlier in the week, on Tuesday night following former President Clinton's speech, in a satellite appearance, thanking the delegates for their votes. Clinton said, "What an incredible honor that you have given me. And I can't believe we just put the biggest crack in that glass ceiling yet." She added, "This is really your victory, this is really your night."

But it wasn't just about making history for women. According to The Guardian, the speech was supposed to be a "moment of reckoning" for America and her nomination acceptance speech touched on many of the same themes she has been making in the press and that the other speakers made this week — this election means a lot for the direction of the country.

It was interesting that she did focus on her opponent, Republican nominee Donald Trump, speaking of him and his convention speech directly. She said, "a man you can bait with a tweet," is not fit to be president. Trump talked about her in his speech saying that her legacy was all about "death, destruction and weakness." That is not how the story goes when Clinton tells it. She went through her record on her issues and presented an America and state of the world that was a little more optimistic and inclusive than the caricature the GOP presented last week.

She even gave a shoutout to President Obama and vice president Joe Biden for their work during the recession. "I don't think [they] get the credit they deserve," she said. Her speech was graceful and managed to do everything a nomination acceptance speech should do.

Here were some of the high points:

Our country's motto is e pluribus unum —“out of many, one. Will our country stay true to that motto? We heard Donald Trump last week at his convention. ..he’s taken the Republican party a long way from morning in America to midnight in america. He wants us to fear the future and fear each other. Well, you know, a great Democratic President, Franklin Delano Roosevelt came up with the perfect rebuke to Trump 80 years ago during a much more perilous time. “The only thing we have to fear is fear itself.”

We will not ban religions we will work with our allies to defeat terrorism.

In all these years of public service. The service has always come easier than the public part. Some people don't know what to make of me. So let me tell you. My family didn’t have their name on buildings. My family were builders.

No one gets through life alone. We have to be there for one another and support each other and lift each other up.

Out party has nominated a woman for president. Standing here as my mother’s daughter and my daughter’s mother I'm so happy this day has come. Im happy for grandma and little girls, and everyone in between. I'm happy for boys and men because when any barrier falls in America, it clears the way for everyone.

Where there's no ceiling, the sky's the limit.

You didn’t hear any of this from Donald Trump at his convention, did you? He spoke for 70 odd minutes and I do mean odd...he doesn't talk about his plans. You might have noticed, I love talking about mine.

And I believe in science!

Way too many dreams die in the parking lots of banks. In America if you can dream it, you should be able to build it.

A man you can bait with a tweet is not a man we can trust with nuclear weapons.

Clinton is known as an "okay" speaker, but tonight she seemed to have gotten everyone in Philadelphia's Wells Fargo Center excited to get out the vote for her this fall. Now that we've heard the speeches, though, it's officially game on. This election season is really only just beginning.