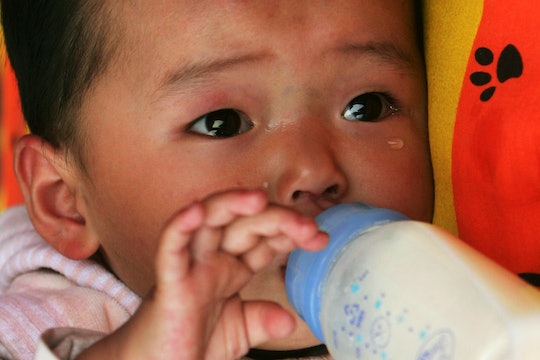 Nothing is sacred, folks. On Wednesday, when Arianna Huffington shared a story at a conference about Uber CEO Travis Kalanick's newfound commitment to meditation, she also revealed something else: Kalanick dips into the office's lactation room in order to find his om, since Uber HQ doesn't have meditation rooms yet. As it turns out, he's not alone: men are reportedly being caught misusing workplace lactation rooms everywhere, all the time, according to women's complaints — which kind of defeats the purpose of having a lactation room in the first place.

According to CNBC, Huffington, who's a strong advocate for getting enough sleep, told the iCONIC conference this week:

Literally, it was an amazing moment last week when we were in the office and he said, 'I really need to go meditate in order to be in a place to make good decisions right now.' And literally [he] went into a lactation room that happened to be open, because they don't have meditation rooms yet.

Thanks to the Affordable Care Act, workplaces with more than 50 employees have to provide nursing women with enough break time for them to go express milk (for up to a year after moms give birth), and they must supply a private area — ahem, not a washroom — for women to pump in. Lactation rooms are meant to make it easy and painless for new moms to express milk, since it can be challenging otherwise for women to return to work and still be able to breastfeed their babies.

Apparently, however, some men in workplaces see lactation rooms more as just a convenient, spare space where they can nap, meditate, or take phone calls. One woman told The Guardian that her CEO would regularly get a little shut-eye in the lactation room. "I had to wake him numerous times, which was humiliating," the woman, who remained anonymous, told The Guardian. "Once he told me: ‘I need another 15 minutes.’" She continued:

I didn’t pump very long after I went back [to work]. I actually just couldn’t produce enough for my baby, and I know it was because of the stress because I never had that issue with my first. I am sad I won’t ever get that back.

While I absolutely understand the appeal of sneaking off to an unused room for a quiet phone call or some shut-eye (I admittedly became a pro at this during my university years), lactation rooms in workplaces need to remain safe spaces for mothers. No mom should have to interrupt someone's phone call in order to use a space designated specifically for her, and no woman should feel like a nuisance because she needs to provide food for her children.

So how can we solve the problem? Employers could have their workplaces put a lock on lactation rooms and only give new moms keys to access the room. Alternatively, they could post rules on lactation room doors. Or — crazy thought — employees could learn to respect the women keeping tiny human beings alive enough to go meditate or nap in an unused closet, rather than a lactation room.

There's a reason why workplaces have lactation rooms, instead of having new moms express milk in a server room or the bathroom or an unused office. That safety and privacy is necessary in order for women to be able to work and continue feeding their kids. They're already doing two jobs at once — let's not make them responsible for teaching their CEOs and coworkers how to behave on top of that.

More Like This
Ginger Zee Had A Perfect Response After A Troll Asked Her "Who's Raising Your Kids?"
It's A Beautiful Day In Jenny Slate’s Neighborhood
The FDA Is Warning Parents To Not Use Baby Neck Floats After One Infant Died
Ketanji Brown Jackson Spoke Directly To Her Daughters In Her Powerful Opening Statement