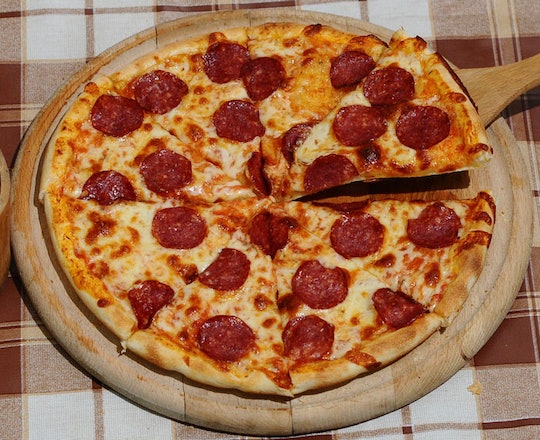 If you've ever seen a guy polish off half a pizza right in front of you, science may now be able to tell you why. Researchers at Cornell University found that men eat 93 percent more pizza around women. According to results published in Evolutionary Psychological Science, "Men who dined with at least one woman ate 93 percent more pizza and 86 percent more salad than men who dined with only other men." Why? Scientists think it's a subconscious display of eating prowess, designed to impress companions. (Cause you know, watching your date scarf down a whole pizza is super sexy.) Meanwhile, women reported that they ate too much, too fast when dining with men.

The study tracked 105 people lunching at an all-you-can-eat buffet (which sounds like a study I wanna be a part of). Researchers asked participants to note their gender, how much they ate, how full they were after the meal, and whether or not they had a comfortable dining experience. While proof that men ate more was well-documented, CBS News points out that despite the number of women who claimed they overate during the meal, those claims were actually unsubstantiated. The takeaway here: Who you eat with can actually influence both how much you eat and how you feel about the meal.

In other words, the next time the guy you're with is chowing down on pizza like this:

... But chill out, cause like, you totally (probably) didn't.

That's some delicious research I can get behind.