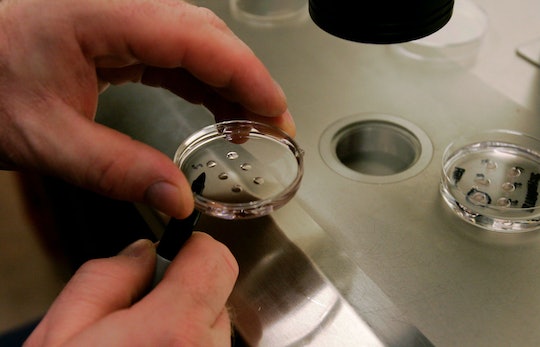 This Treatment Could Help Menopausal Women Have Kids

As a woman, sometimes it seems like the whole world is against you. Society, culture, history — all have betrayed females at some point. Even biology targets women; Men can reproduce at any age, but once 50 rolls around, it seems that most women have to give up on having any more of their own kids. However, in a bit of encouraging news, all that could be about to change. Yes, you read that right: Menopausal women could get pregnant, all thanks to a new fertility treatment that's making waves in the medical community.

The treatment, discovered by Kostantinos Sfakianoudis, a gynecologist at the Greek fertility clinic Genesis Athens, includes a process that rejuvenates ovaries in order to encourage them to reject some of the symptoms of menopause, including the releasing of the women's own eggs. The process focuses on the "healing properties of blood," and, though it's quite confusing, it's also highly promising for women everywhere who face fertility issues.

Though the only two women Sfakianoudis reported as getting pregnant were 39 and 40 years old, the new findings are still a breakthrough for women who previously thought that their child-bearing years were behind them. And with more and more Americans waiting longer to get married, it's likely that more women will seek to become pregnant later in life, rather than sooner.

The procedure involves Sfakianoudis and his colleagues at the Genesis Athens Clinic in Greece "draw[ing] blood from their patients and spin[ning] it in a centrifuge to isolate platelet-rich plasma." Then, they "use this plasma to repair women’s reproductive systems, injecting it directly into the ovaries and uterus." Although only two of the patients — which include "27 menopausal and peri-menopausal women, between the ages of 34 and 51" — have become pregnant, these new findings are definitely a game-changer.

And though it's unclear why exactly this new treatment works the way it does, scientists point to the plasma's ability to "wake up stem cells" in the women's ovaries, allowing more eggs to be produced.

Sfakianoudis is hopeful about the new treatment, saying "some people might not meet their partners until later in life. If there is a treatment that will help them, then why not use it?” He even cites one woman's miscarriage as "extremely encouraging," considering her advanced maternal age.

However, he also made it clear that this doesn't necessarily mean all menopausal and post-menopausal women should undergo the new treatment. "I do think it’s questionable whether we should allow women in their 60s and 70s to get pregnant," Sfakianoudis emphasized. So, while these new findings do have the potential to change women's lives, that doesn't mean it's for everyone. Still, it's a surprising and exciting development nonetheless — and anything that evens the playing field a bit is worth noting.