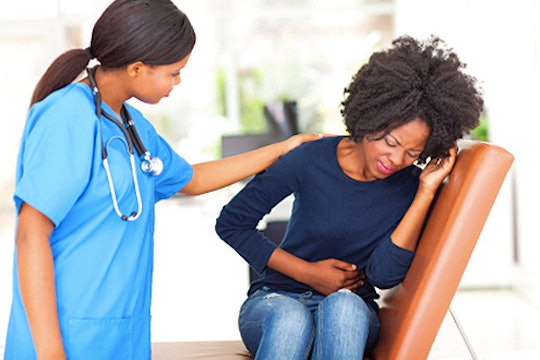 Menstrual Cups & TSS — 3 Things To Know About About The Risk

Toxic shock syndrome has been a longtime risk of using tampons. But menstrual cups and TSS are also connected as well. This is surprising news for people who thought the cup was a goddess' gift to menstruating women everywhere. But to really understand why TSS might be a risk for women using the cup, you have to know what causes toxic shock syndrome, and how you can take precautions so that you don't develop the illness.

A Vice story went viral over the summer about a Los Angeles model who developed TSS from using a tampon. At the age of 24, Lauren Wasser ended up in the hospital with a fever of 107 degrees. Her organs were shutting down and she had suffered a massive heart attack. Doctors had no idea what was causing Masser's illness until an infectious disease doctor asked if she had a tampon inside her. Indeed, Masser did. The lab confirmed that the tampon tested positive for TSS. As a result of the infection caused by TSS, Wasser developed gangrene and had to have part of her leg amputated. This tragic story had women terrified that they too could develop TSS, an illness anyone who's used a tampon knows about, but never thinks could happen to them.

Masser's high profile and story is useful in educating women about TSS: what causes it and how you can prevent it when using a menstrual cup or tampon.