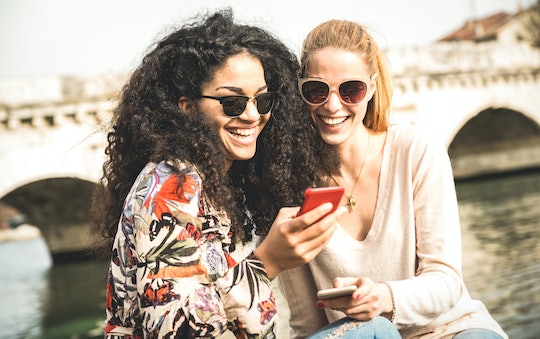 Ever been hangry, so you had to order some extra guac? Perhaps followed it up with a marg and a chat with your fav friend? If this sounds familiar, you're part of the ever changing landscape of modern language. In fact, Merriam-Webster's online dictionary now includes a bunch of new words in every millennial's daily vocabulary.

In a recent announcement, Merriam-Webster's wordsmiths said on its website: "A dictionary is almost like a glossary of life: peek inside and you see descriptions of everything around you. The addition of new words to a dictionary is a step in the continuous process of recording our ever-expanding language."

Not surprisingly, as Hello Giggles pointed out, culinary words account for a high number of new entries, like avo. One look at your Instagram feed, and you'll know just how important food is to millennials — whether it's home-cooked meals or restaurant fare.

Basically, people are obsessed with eating. New carb counting diets gave birth to the zoodles — or zucchini noodles. Some of the more surprising food entries include dark chocolate and kombucha. Kombucha, a fermented health drink, has been popular for a long time so it's a surprise it's appearing for the first time. And, while dark chocolate seems like a self explanatory word, definition-seekers needed distinction between it's milk and white counterparts.

Dependence on social media and an increasing need for immediate gratification might be a the root of society's quickly evolving vocabulary. Inc. Magazine contributing writer John Brandon explained that with the advent of social media and texting came an entirely new way to communicate." He added, according to Inc. Magazine, "It's a mix of shorthand, conjoined words, abbreviations, and phrases that came about because of a meme or even a mistake on social media that people found funny — and useful for communicating in a digital age."

Cultural additions like iftar and Latinx and bougie also made the cut. Iftar is a meal taken by Muslims at sundown to break the daily fast during Ramadan, as Quartz explained. Bougie has more of a negative connotation referring to the class term bourgeois. And, finally, Latinx is a new gender neutral word for Latino or Latina, according to TIME.

Tech also made a showing with the additions of force quit, Instagramming, and airplane mode as in, "I was Instagramming and had to force quit my iPad before I put it into air plane mode."

Another word that made the cut? Mansplaining. Merriam-Webster followed Oxford Dictionary's lead on this one, and decided on it's necessary inclusion, as USA Today reported. In what might be an ironic twist, it's probable that a man wrote the definition of mansplaining for Merriam-Webster and now women across the world are reading his definition for a word that essentially means a man explaining something for a woman who already understands.

Evolving language is nothing new. Today's adorbs was yesterday's super cute. But because of today's digital lifestyle, language seems to be changing at a faster rate and the rest of the world is just trying to catch up. As Language Trainer editor, Katie Collom, explained:

Language tends to evolve quickly with each generation bringing in new terms and making them popular. What was "groovy" yesterday may be "cool" today and so on. Arguably, Millennial language tends to change much faster because we live in a world of hyper-connectivity. Where words and phrases may once have taken time to catch on before, now they can go viral overnight.

While millennials might be labeled as lazy or entitled, they've got one thing going for them — creation of new words that are sure to stick around for a long time to come. Hopefully this wasn't TL;DR (too long, didn't read), but if you did get this far congrats on the bingeworthy news find.

So continue drinking your margs and tagging your BFF in your Insta posts, because you are totes making a mark on today's popular language.