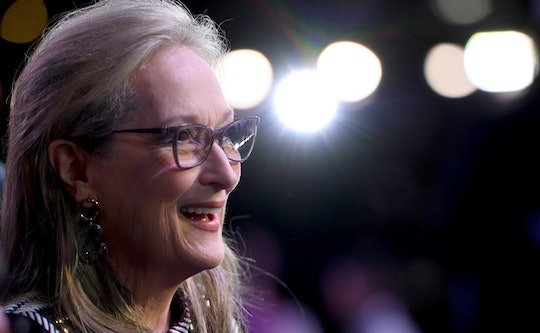 Meryl Streep is one of the hardest working women in Hollywood, but now she's ready to step into a new role: Grandmother. The 69-year-old actress opened up to Interview about becoming a grandma to daughter Mamie Gummer's first child. Meryl Streep says she's going to be this kind of grandma, revealing that, prior to becoming a grandma, she was most looking forward to being able to "ruin her life" with "unsolicited advice," which might sound like a nightmare to some, but I kind of love her for it.

Speaking with Glenda Jackson for a piece for Interview about the major milestone, Streep said she was looking forward to stepping away from work for a while to focus on family. The Big Little Lies star said she had been "working like mad," Interview reported. Gummer and fiancé Mehar Sethi welcomed a baby boy in February — after the interview was conducted — according to Us Weekly.

"I've been working like mad for quite a while, so I'm getting ready for my first grandchild. My daughter's having a baby in February, so I'm going to go out and ruin her life. I specialize in unsolicited advice," Streep told Jackson.

The interview marked the first time Streep discussed becoming a grandmother, according to Harper's Bazaar, as well as a rare instance of her opening up about her children. Both she and Gummer are extremely private. The True Detective star shares very little about her relationship with Sethi, and has posted nothing online about her pregnancy or her son's birth. Reports began to surface that she was expecting in December, and were eventually confirmed by her rep to Us Weekly. Details about the child's birth and name have yet to be revealed, according to the outlet.

The 35-year-old actress' pregnancy came just a few months after she and Sethi got engaged, according to E! Online. In August 2018, Sethi posted a picture announcing their engagement on social media, captioning it, "My fiancé," according to ET Online. Per the outlet's reporting, the proposal took place in Croatia, while the couple was vacationing together.

Before Gummer started dating Sethi, she was married to actor Benjamin Walker. The couple met on set of the play Les Liaisons Dangereuses in 2008. They called it quits in 2013 after roughly two years of marriage, Us Weekly reported. Her rep told Us Weekly the split was "very amicable." Walker went on to marry Kaya Scodelario in December 2015, People reported. Gummer also moved on, starting her relationship with Sethi.

Due to the private nature of both Streep and her oldest child, Gummer, fans probably won't get a glimpse at the Mary Poppins Returns star's grandson for a while, if at all. She seldom speaks on her family, so soak it in it when she does. Perhaps one day the actress will share some of that sweet unsolicited advice with the world.