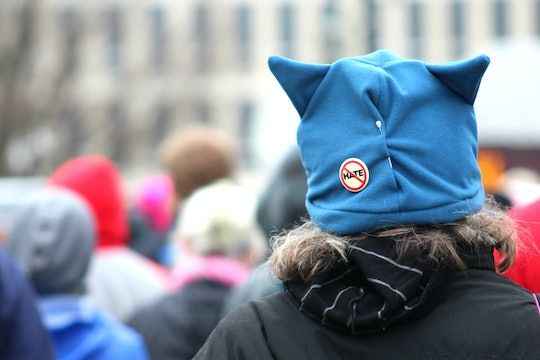 Messages Of Hope From The Women's March

With half a million demonstrators on the national mall and surrounding streets Saturday, the Women's March on Washington, despite having to compete with President Trump's official swearing in the day before, ended up becoming the biggest moment of inauguration weekend. The pre-march rally lineup of feminist speakers included such names as Wendy Carrillo, Scarlett Johansson, Gloria Allred, America Ferrera, Angela Davis, Charlie Brockman, Gloria Steinem, Janet Mock, Maryum Ali, Van Jones, Michael Moore, Mothers of the Movement (mothers of black men shot by police), and a very young (and very powerful) Sophie Cruz. Moving performances by Janelle Monáe, Alicia Keyes, and a surprise visit from singer Madonna capped off what was already an impassioned event. But the messages of hope and inspiration at the Women's March didn't stop at the stage — in the crowd, women, men, and children alike had something to say that was perhaps even more important.

"The love here is palpable," mom Melody Choates, who had brought her young daughter Victoria with her, told Romper. "If you are like me, and you are feeling heartbroken and crushed over this election, and being marginalized, just know there are millions and millions of people just like us [here today.]"

Choates wasn't the only person with a stirring message for women, girls, and their allies, all across the nation, who were struggling to find meaning following Trump's ascension to the presidency; Romper asked other attendees as well to write down or express their thoughts on their message to others or their hopes for the future. Here's what they said:

"Even though we're full of despair, this is a time for us to unify, come together, and share in the beauty of our beliefs and ideals. If we just cling to those beliefs, if we organize and engage, we can make these four years better than we've anticipated."

Claudia was asked to write a simple message for anyone feeling hurt or shut down from the election fallout and Trump's inauguration. Her answer? "Love Trumps hate."

What were Julia and Domino most looking forward to, over the next four years? That they'd be able to "pummel the patriarchy" and shut down toxic masculinity that hurts both men and women alike.

"Try not to back down. Rise to the challenge. Make Trump re-think his actions, and make him see the way that we're feeling."

What is Georgette most excited for, over the next four to eight years? "I'm excited for more of this, " she said. "More of us sticking together. This is not the end of us coming together to get our message across. I just want people to know that they're not alone. Many other people are behind them in their struggles."

When Jamie was asked what she planned on doing over the next four to eight years, she answered swiftly and succinctly. "Becoming more active in forcing change," she wrote.

Judy and Kim were asked to send a message of hope to others not able to make the march on Saturday. "How about we show you what we brought?" they joked, holding up their march signs, which listed "women, children, the disabled, LGBTQ, education, the elderly, health care, national parks, equality, love, Mother Nature, vaccination, veterans" and "everyone" among the things for which they were marching, and noted that a "woman's place" wasn't in the kitchen — it was in the "resistance."

"This march makes me feel hopeful," Laura wrote, posing for a photo with her "team" of young, fellow feminists. "Look at how many people are here, standing up for what is right!"

"You are not alone. They may have won the battle, but we will win the war."

"I'm definitely excited about young people coming together and being able to their opinions," Ryan said, of what's in store for the next four or eight years. "Just being heard. I hope everyone enjoys the time we have now to march, and I'm looking forward to doing even more of it in the future."

"We MUST come together," Carole wrote. "... Love is the answer — love will heal the hate, but it must be ACTIVE love."

The weekend may have been a divisive one — at least a handful of pro-Trump protesters weaved their way through the massive Women's March crowds on Saturday, with both sides appearing agitated — but overall, the hopeful mood seemed to match the crowd's general message to the world: Open minds and open hearts will win the "war," always.