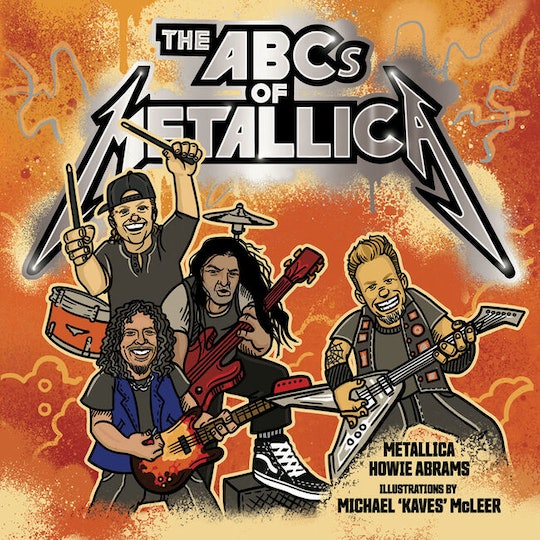 Heavy metal music might not be the preferred or most popular genre of little kids, but it's really never too early for them to start learning about it. And parents who perhaps spent a lot of time in mosh pits at concerts or simply love rock music will be delighted to know that the band Metallica is releasing a children's book soon that will not only teach kids how to read, but it will also inform them about all the ins and outs of the heavy metal band.

Although Metallica might be known for their dark imagery and metal vibes, the band does have a soft and compassionate side to them. After all, members of the bands have kids themselves, so it really shouldn't come as much surprise that the band is releasing its own children's book full of rhymes and illustrations.

The book — titled ABC's Of Metallica — goes through the ABCs of, well, them, detailing the history of the band and highlighting the important moments from their very long career since they formed in 1981. What's more, the book, written by author Howie Abrams, is said to feature plenty of rhymes as well as hand-drawn illustrations done by Michael "Kaves" McLeer.

The book, which costs $18.99, is only available for preorder right now and will be delivered on Nov. 26, 2019, which means it could be the perfect gift kids for heavy metal-loving parents come this holiday season.

Beyond simply being entertaining and educational, a portion from the proceeds of the book will also be donated to a great cause — Metallica's charity, All Within My Hands. The charity, which was started in 2017, tries to create sustainable communities by supporting education in the workforce, fighting against hunger, and other services that are critical to communities. Metallica also donates a portion of ticket sales in every city to a local charity that focuses on feeding people in the communities.

This isn't the first time Metallica has mixed their music with things children love. In 2016, for example, the band appeared on The Tonight Show Starring Jimmy Fallon to sing their song "Enter Sandman" with instruments found in a children's classroom.

Parents might be so excited to read this book to their kids, especially since it might be a while before they expose their kids to their music and turn their kids into full blown Metallica fans. Especially since their hit songs like "Master of Puppets" and "Enter Sandman" aren't necessarily the most "kid friendly" songs (although some kids would beg to differ).

But research shows that exposing your kids to heavy metal music at a young age is actually a good thing. Indeed, a study published in 2014 found that young "metal heads" in the 1980s were "significantly happier in their youth, and better adjusted currently" than their peers who listened to different genres of music, according to Pacific Standard.

So reading this book to or with your tiny metal heads in the making really seems like a win-win.