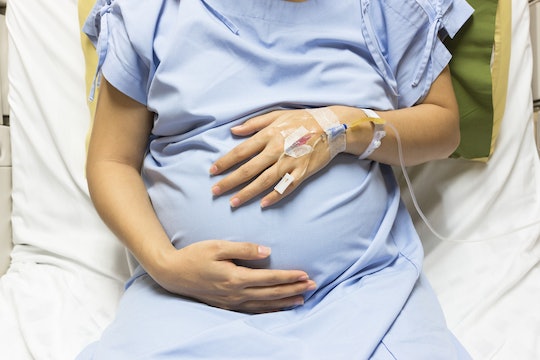 Methods Of Pain Relief During Labor Vary Across The U.S., New Study Finds

No two labors are the exact same, because everyone's body and experience is different. Still, it's important for medical professionals to be aware of why some differences occur. One part of the labor process that sometimes goes unmentioned is the pain relief method used. In a new study, researchers found that methods of pain relief during labor vary across the country. For people who are expecting, it may be useful to know what methods are most common in your state.

Essentially, analgesia differs from anesthesia in that you can still feel some pain when using analgesia. The pain is only reduced, as noted by WebMD, instead of totally eliminated. Anesthesia, on the other hand, blocks pain as well as any other feeling.

Ideally, labor analgesia (pain management) should give sufficient pain relief to a laboring mom without interfering with how labor progresses or what happens along the way. As noted in Obstetric Anesthesia, no single method works for everybody, but neuraxial analgesia is quite popular.

For a new study published in JAMA Network Open, researchers wanted to know if the prevalence of neuraxial labor analgesia changed at all in different parts of the country.

In the study, researchers used a population-based, cross-sectional analysis of over 2.6 million pregnant women who experienced labor, as reported by the study's abstract.

Researchers found that 73 percent of the women included in the study used neuraxial analgesia, with the lowest frequency in Maine and the highest in Nevada, at 36.6 and 80.1 percent respectively.

In the study's abstract, researchers noted:

However, according to EurekAlert!, those variations were only partially explained at the state level, which means there are likely other factors at the patient and hospital level that weren't considered. But, why is any of this important to know?

"Identifying the presence and extent of variation may provide insights into practice variation and may indicate where access to neuraxial analgesia is inadequate," researchers wrote in the study's abstract.

In a news release on JAMA Network Open, researchers noted that understanding the reasons for the differences among use across the country can also help people understand how they might affect health outcomes for women and newborns.

For example, in 2017, NPR reported that some states make it challenging for teens in labor to access pain relief. In one case, NPR reported that a 15-year-old was denied an epidural, because she did not have parental consent. In Ohio, people under 18 who are in labor cannot give consent regarding their own medical care, as noted by the American Medical Association. They'll receive only emergency or essential services, but nothing that's elective — like an epidural.

Being aware of pain relief differences across states can help both medical professionals and expecting moms better prepare for labor and know which options they may have — and which they don't.