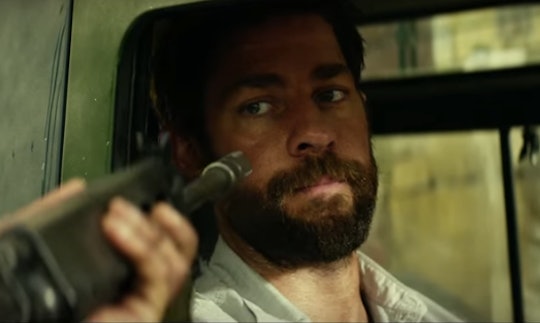 Republican candidates love to hate on Hillary Clinton. Tonight, during the fourth GOP primary debate, candidates mentioned her over and over again. Ben Carson deflected allegations about his murky bio by talking about Benghazi. "Stop Hillary" was the official WiFi password (yes, really). And then a trailer for 13 Hours, Michael Bay’s movie about Benghazi aired right smack in the middle of the debate broadcast. Are we getting a clear message yet?

While the candidates disagree on many things, one thing currently unites the Republican party: They really, really don’t like Hillary Clinton. The GOP base is easily riled up just by mentioning her name (go ahead, do a quick Twitter search if you want to see things get dirty). And even Democrats seem undecided about her. But one thing is pretty clear: Benghazi isn't going away. But even Hillary is tiring of the topic. Responding to questions at the most recent hearings in October, Hillary seemed to pity her questioners.

Clinton's brushing off of Benghazi accusers doesn't appear to stem from her thinking it's not an important issue, but rather the fact that there have been a lot of Benghazi hearings and Clinton has responded again (and again) detailing what happened that day and in the days following. Almost everyone but the Republican candidates seems to be thinking the same thing: Are we done with this Benghazi thing yet? Apparently not. And they want to make sure we don't forget it, either. At least not while Americans are forming their all-important decisions about who they're going to vote for.

Let's just consider this for a minute: 13 Hours: The Secret Soldiers of Benghazi comes out on January 15, 2016. That’s after Thanksgiving. After holiday blockbusters. There is almost no reason, from a marketing standpoint, to air the trailer two months in advance on cable television. It’s a Michael Bay movie based on current events. No studio exec is worried it’s going to bomb. It’s almost guaranteed to sell tickets.

The only reason to air a trailer for a movie about Benghazi during this debate is to get people talking about Benghazi again. And to keep them talking. And, perhaps most of all, to remind them that Hillary Clinton was involved. FOX cable channels are the perfect space to advertise this movie. No one was fooled, either:

At least viewers are onto what looks a whole lot like political product placement.