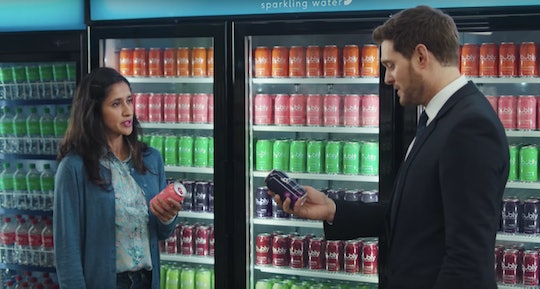 Even before the game begins, Super Bowl ads are rolling out for your viewing pleasure. Famously featuring big name actors and celebrities, Super Bowl commercials provide comic relief to what can be an otherwise tense night for big fans of the competing teams. For those looking to laugh, Michael Bublé's Super Bowl commercial is just what you need to break the ice.

Bublé is starring in a 30-second ad for Pepsi Co-owned sparkling water brand Bubly, as Ad Age reported. And if you're guessing he got the job because of his killer singing voice, you'd be wrong. He was chosen because the word Bubly looks a lot like Bublé, and who doesn't like a good pun? The Canadian singer shared the full commercial to his Instagram page on Friday.

Pepsi first released a teaser for the ad earlier this month that shows Bublé sitting on the floor in a grocery store, taking a permanent marker to some brightly colored cans of sparking water. And, you guessed it, he's changing the "y" in Bubly to an "é." According to MSN, comedienne Aparna Nancherla will also be featured in the commercial. Appropriately named "Can I have a bublé?," the ad will showcase the brand's four new flavors: blackberrybubly, cranberrybubly, raspberrybubly and peachbubly. But, if you ask Bublé, the spelling is a bit off on all four.

Stacy Taffet, VP of PepsiCo's water portfolio, explained in a press release that the ad is an attempt to showcase how "fun" sparkling water can be as an alternative to soda. "Sparkling water fans across the country have fallen in love with Bubly and now we're thrilled to show-off its fun personality on the world's biggest stage," she said, according to MSN. "With this spot, we knew we had one job to do – get people to crack a smile – and there was one person we knew could help us do it: Michael Bublé."

It seems Bublé agrees with the humor of the ad. He said his own press release that even though he's not American, he is a lover of all things Super Bowl:

I might be Canadian, but I’m a big fan of American football. had a blast doing my very first Super Bowl commercial with bublé—I mean bubly. Because of our similar names, the brand and I share a special bond. I love how the cans are bold, bright, and full of personality. They’re perfect for any Super Bowl viewing partés you might be having.

In an interview with Forbes, Bublé explained that he was drawn to the commercial as soon as he read the script, comparing it to some other acting that he did related to the spelling of his name:

I thought it was very sweet and very funny, really smart, and it reminded me a little bit of a skit I did on Saturday Night Live two years ago. Seth Meyers had written this really great piece called Hamm and Bubbly with me and Jon Hamm, and it was in that kind of vein. It was making fun of the name. Honestly, I couldn't think of a more perfect connection than Michael Bublé and Bubly Sparkling Water. I got it very quickly, obviously, and I felt really grateful.

And if you're loving the ad as much as its star does, Bublé has some good news for you: there's more where that came from. He told Forbes:

It's funny because there's a version that they're going to use for the Super Bowl and it's more sweet, but there's longer versions that I like even more which are I just think even funnier. But I think people are going to see that on YouTube and they'll use that for social media, and I don't know. It's Pepsi, they're giants. Who knows? They'll do what they want to do.

If the whole Christmas carol singing thing doesn't work out for Bublé, I think he has a shot at a career in comedy. That man is funné.