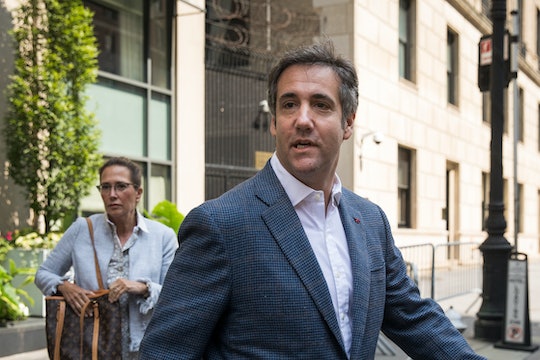 President Donald Trump's former personal attorney and so-called "fixer" surrendered to the FBI shortly before a 4 p.m. court proceeding on Tuesday afternoon, according to CNN, and the world has been anxiously awaiting the details of Michael Cohen's plea deal, and its effect on the Trump presidency. And on Tuesday evening, according to CNN, Cohen plead guilty to multiple counts of campaign finance violations, tax fraud, and bank fraud.

According to The Washington Post, Cohen "reached a plea deal with federal prosecutors" on Tuesday, and specifics will "include jail time" — he's facing a maximum of 65 years in prison — as well as a "substantial monetary fine," as CNN reported. Cohen's sentencing is set for Dec. 12, according to CNN, and he was released on a $500,000 bond. You can view the full details of the plea agreement in this PDF published by The New York Times.

Cohen was reportedly not expected to cooperate, according to CNN, and it's still unclear if his agreement is a "cooperation deal," as ABC News reported, which could or could not provide investigators with more details for their probe into Russian interference in the 2016 election. It should be noted, however, that, as The New York Times reported, Cohen previously told George Stephanopoulos that should he be offered "leniency in exchange for incriminating information" on the POTUS, he'd put "his family and country first."

Romper's request for comment on the agreement from Cohen's lawyer was not immediately returned.

While your average citizen probably couldn't care less or knows much about the ins and outs of bank and tax fraud, the details behind Cohen's reported campaign finance violations could prove to be particularly telling moving forward. According to Business Insider, when he entered his plea on Tuesday, Cohen said that he had "made the illegal campaign and corporate contributions 'at the direction of the candidate' and with the 'purpose of influencing the election.'"

For over a decade, Cohen was part of Trump's most inner circle, serving as his personal attorney first at the Trump Organization, and then in the White House. After a FBI raid of Cohen's office, hotel room and home in April, Trump began distancing himself from Cohen, but there's no un-ringing that bell. Cohen "knows where all the bodies are buried," author and veteran journalist Seth Hettena told ABC News.

And that includes, according to NBC News, the $130,000 Cohen allegedly paid adult film star Stormy Daniels to keep quiet about an alleged affair with Trump, and another $150,000 allegedly given to former Playboy model Karen McDougal for the same purpose. Trump has denied both affairs, according to USA Today, and initially denied knowing about either payment.

However, it was later confirmed, through a financial disclosure form filed with the Office of Government Ethics, that he had reportedly reimbursed Cohen for the payment to Daniels, according to MarketWatch. And in July, The New York Times obtained an audio recording allegedly of Trump and Cohen discussing the payment to McDougal.

So if one or more of these payments make Cohen guilty of violating campaign finance law, and Trump was purportedly involved, what does that mean for him?

If the Federal Election Commission can prove that Trump knew about the payments, and that they were made with the intention of benefitting him in the election, he could charged as a conspirator, as Vox reported. According to the U.S. Sentencing Commission Guidelines, "making, receiving, or failing to report a contribution, donation, or expenditure in violation of the federal election campaign act" could result in prison time, should the FEC choose to pursue (and win) the case.

"Trump would be guilty of conspiring to commit a federal crime," Christopher Slobogin, a law professor at Vanderbilt University, told Vox. But, because he's a sitting president, he hasn't been indicted, which could only happen if Congress impeaches him, as Vox explained.

As CNN reported following the plea agreement, a source from the Trump organization told the news outlet that "Cohen doesn't have any dirt" on Trump. Additionally, Rudy Giuliani, Trump's personal attorney told The New York Times in a statement:

There is no allegation of any wrongdoing against the President in the government's charges against Mr. Cohen. It is clear that, as the prosecutor noted, Mr. Cohen's actions reflect a pattern of lies and dishonesty over a significant period of time.

Essentially, there's still a lot to unpack in this case and its ramifications for the current presidency — it's not over yet.