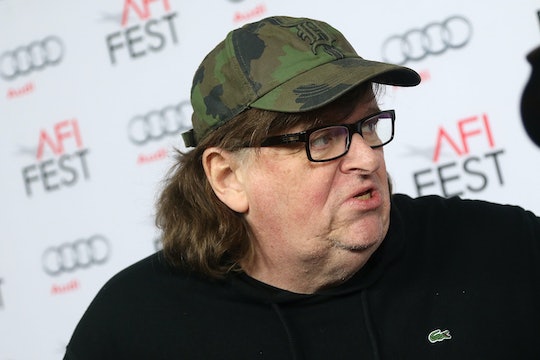 It seems nothing makes sense anymore, at least when it comes to Donald Trump and rhetoric surrounding Muslims, but that’s where Michael Moore comes in. Known for his political and social activism, Moore protested outside of Trump Tower Wednesday evening. Why? To shed light on the fact that we are all human, “we are all Muslim,” and we are all in this together. Shortly after being asked to leave the Trump Tower premises by police, Moore posted an open letter on his Facebook page condemning the Republican presidential candidate for his call to "ban all Muslims" from coming to the United States. Regardless of your feelings on Moore, the three best quotes from his letter couldn’t have been more powerful — or more important.

You see, Trump is currently the frontrunner in his party. He has a strangely high amount of support, he is in a position of power, and he is spewing hate-filled ideologies which are rooted in fear and not reality. In short, the prospect of him becoming president of the United States is terrifying. But Moore took a stand and broke down Trump’s comments in an intelligent and mindful way.

In short, Moore asked everyone to stand in solidarity not only with Muslims, but with each other, according to the letter he posted on Facebook:

Here we are in 2015, like many other angry white guys, you are frightened by a bogeyman who is out to get you. That bogeyman, in your mind, are all Muslims. Not just the ones who have killed, but ALL MUSLIMS...so, in desperation and insanity, you call for a ban on all Muslims entering this country. I was raised to believe that we are all each other's brother and sister, regardless of race, creed or color. That means if you want to ban Muslims, you are first going to have to ban me. And everyone else. We are all Muslim.

Moore also went on to share the critical idea that — regardless of religion — people all over the world are connected:

We are all children of God (or nature or whatever you believe in), part of the human family, and nothing you say or do can change that fact one iota.

(If there was ever a “drop the mic” moment, this was it.)

Moore also suggested that Trump’s chances of actually getting into the White House are slim to none, thank goodness. But he said it's important for people who don't want Trump as their president to voice their opposition to Trump's statements, according to Moore's letter:

Fortunately, Donald, you and your supporters no longer look like what America actually is today. We are not a country of angry white guys...[e]ighty-one percent of the electorate who will pick the president next year are either female, people of color, or young people between the ages of 18 and 35. In other words, not you. And not the people who want you leading their country.

Despite the fact that most people within the Republican Party and across the U.S. don't support Trump's recent rhetoric, Moore still wrote this letter. Why? Because it matters. People matter. Humanity matters. And if we “live in fear” aren’t the terrorists winning? The ideology that we should keep all Muslims out because a few radicals pervert the religion is fear-mongering at it’s finest.

So, while Moore may be best known for his documentary films — which are controversial and have covered everything from gun laws and the Iraq war to the United States healthcare system — this is an effort I hope no one forgets. Because it is needed; it is necessary.

Moore is asking all American's who agree with him to sign this letter — as a symbol of solidarity and support. (The letter can be signed here.)