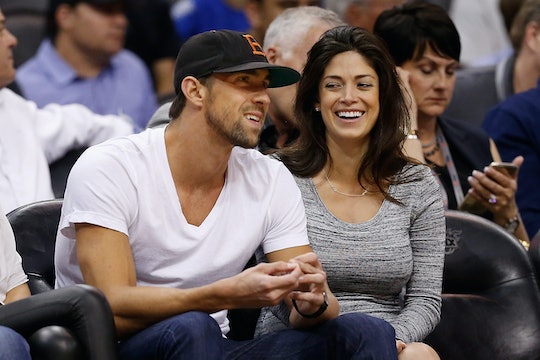 It looks like congratulations are in order for one world-class athlete. That's because the most decorated Olympic swimmer of all time has officially added another member to his finally. On Sept 9, Michael and Nicole Phelps welcomed their third child, People reported — and they look so happy as a family of five.

On Wednesday, Sept. 11, Phelps took to Instagram to announce the arrival of baby number three — another healthy son. "Family of 5! Welcome @mavericknphelps to the world!" the proud father captioned a hospital photo of himself, Nicole, and their three sons. "Born 9-9-19. Mama and baby are healthy and the boys are pumped to be big bros! #housefullofboys."

Nicole shared the same photo on her Instagram, adding, "Our lil big man was 6lb 5o and 20”. He instantly has stolen all of our hearts and keeps me an ecstatic mommy of boys. I can’t wait to walk this journey surrounded by my men. #familyof5."

As you might have noticed, it seems the Phelpses have already created an Instagram account for their newest addition, according top PopSugar. There aren't any posts yet, but baby Maverick already has thousands of followers — and climbing by the second. And I mean, can you blame Instagram? Just look at that adorable family!

For the record, Michael and Nicole's two other sons — Boomer, 3, and Beckett, 18 months — are already well on their way to becoming social media stars themselves. Boomer boasts 679,000 Instagram followers while Beckett has 67,000 followers. And — oh hey — both brothers' accounts already have posts showing them holding their newest sibling.

The caption on Beckett's Instagram reads, "I’m officially a Big Brother and I won’t let go!! #luckybigbro." (OMG, just look at all of that hair!)

The professional swimmer and the former Miss California USA announced back in March that they were expecting their third child, Us Weekly reported. “Can’t wait to see the journey that this takes us on!!!” Phelps wrote on Instagram at the time, alongside a photo of Boomer and Beckett riding in a toy car with balloons that spelled, "BABY." Nicole shared the same photo, writing, "Oops we did it again. I get to be a mama X3!!"

With three little ones ages 3 and under, it's bound to be a wild adventure for the Phelpses — at least until they get the hang of things. The soon-to-be dad of three was confident they would manage, though. "It will be a journey, but we can already handle two. We’ll tag-team!" he told Parents in July. (As a mom of four, I can attest this strategy is a lifesaver.)

Clearly, Michael and Nicole — as well as big brothers Boomer and Beckett — are over the moon for baby Maverick. I wonder if all thre boys will be making an appearance at the 2020 Olympics in Tokyo to watch Michael compete? Congrats again, to the Phelps family!