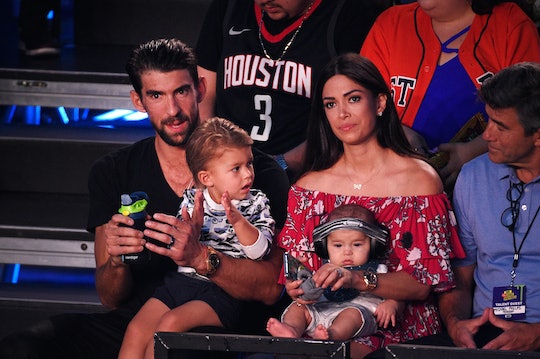 He's retired from his day job at 33, and is the most decorated Olympic athlete of all time. So you'd think he'd have the emotional and mental discipline necessary to be an awesome, calm parent at all times, right? Nope. While he and his wife expecting baby no. 3, Michael Phelps admits parenting isn't easy and, just like the rest of us, he doesn't have "all the answers."

As People reported, Phelps and Nicole, who is currently pregnant again, will soon have three kids under the age of four in the house. But the pair, parents to Boomer Robert, 3, and Beckett Richard, 15 months, opened up to Parents magazine in its July issue about their approach as a family. “There was an initial ‘Oh my gosh, what are we doing?’ feeling,” noted Nicole, a former Miss California USA, of how she felt when she learned another baby was on the way. “I got pregnant with Beckett a month after Boomer turned 1, and I got pregnant with our third a month before Beckett turned 1.”

While both Phelps parents sound ultra-relatable, with Nicole admitting to having sleep problems with Beckett, exhaustion over household chores and the infamous mom guilt, it was Michael's quotes that were really eye-opening.

Many of us remember the sheer grit he displayed in his swimming career — bringing in 20 Olympic Gold medals and medaling 24 times overall, according to the Los Angeles Times.

“In swimming, I know better than a lot of people in this world, but when it comes to parenting, I don’t have all the answers," the champion told Parents. "It’s about me and Nicole always working together.”

I just love this. It shows that this game-changer (CNBC reported Phelps has moved into entrepreneurial and philanthropic roles, including working with Colgate's Save the Water campaign), is humble, even with such a professional track record. Because this parenting thing will do that to you.

"It’s learning patience and staying calm." he added to the magazine as far as the skills he's learned fathering his boys. "Nicole taught Booms to take ‘lion breaths’ when he gets frustrated. There are times where I get frustrated and he says to me, ‘Dad take a breath!”

And while Us Weekly added the family awaits the discovery of if whether it's a another boy or their first girl joining the squad, Phelps noted to Parents that he's already thought about whether he would want his offspring to follow in his footsteps. “If my kids want to swim, great. If they don’t, awesome. But being who I am is challenging. I find myself critiquing Boomer’s stroke. That’s my competitive side coming out," explained the dad, who added that working out is his main hack as far as controlling his mood with the kids.

It's nice to see Phelps doing so well in the next part of life after working mainly on his athletic career for so long. He deserves his current happiness. He sounds like he'd be a great parenting coach too, come to think about it.