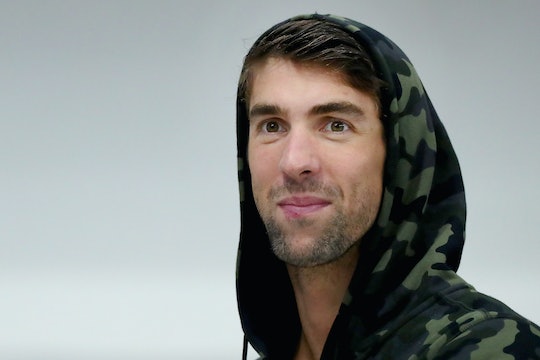 Michael Phelps' Instagram Photos Of His Son Will Melt Your Heart

Since the birth of Boomer Robert Phelps last month, his dad's social media has gotten a whole lot more interesting. Topless pics are fine and all, but Michael Phelps' Instagram photos of his son are too cute for words. Phelps and his fiancée, Nicole Johnson, welcomed Boomer on May 5, and his presence has been making his parents' social media accounts infinitely better ever since, from the moment we saw that first pic welcoming him to the world, in which dad was once again topless (was that a skin to skin thing, or does the Olympic swimming champion just not own any shirts?).

Not only is Boomer adorable in his own right, the effect he has on Phelps will melt even the coldest of hearts. It's clear from his face in each photo, and his ridiculously enthusiastic captions (seriously, I think he's putting the world's exclamation point supply in danger) that he's simply over the moon for his son. And, honestly, it doesn't get much better than the pure joy Phelps clearly feels for his new role as a dad. It's kind of like watching a YouTube video of a horse and a goat that are best friends; you just feel so happy for them both, and witnessing their love makes your day a little brighter.

I mean, come on! Just look at the wonder on his face when he stares at Boomer (still not used to that name, but OK).

In this shot, he calls himself the "happiest person in the world!!" and I totally believe him.

"I can't stop just looking at our awesome little guy," Phelps wrote of this pic, and it seems like Boomer is already getting tired of him. Love it.

"Nothing like being home with the family!!!" Phelps type-screamed about this photo. I've never seen someone so enthusiastic about literally doing nothing. Also curious who took this pic.

"Boomer says what's up y'all!!!" Honestly, Boomer looks like he's actually saying "WTF," and I am so here for that.

Look at this little snuggle monkey! So cute! And because Phelps is a man, only one commenter shamed him for what they perceived as child endangerment. Imagine what would happen if Chrissy Teigen ever posted a pic of her baby in a car seat.

"The little man didn't wanna miss national selfie day!!" For real, the very idea of a "National Selfie Day" makes me want to resign from the human race, but then Boomer's sweet, sleeping face talked me into staying.

"Looks like@boomerrphelps is ready for Omaha!" Notice the tag. That's right, Boomer has his very own Instagram account now, and the pics get even better. Behold:

Friday! Boomer Phelps is officially my new mascot, and he should be yours, too.