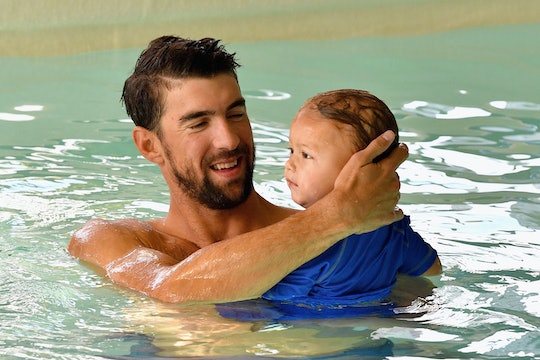 Michael Phelps Talks About Boomer’s Potential Swimming Career, & His Viewpoint Is So Refreshing

Ever since Michael Phelps welcomed his son Boomer into the world, fans have wondered whether Phelps would encourage Boomer to pursue a career in swimming. Although it's an understandable speculation given Phelps' success in the swimming world (Phelps has 23 Olympic gold medals, BTW), it's not necessarily a fair one. If you've ever felt uneasy about the pressure and expectations celebrity kids can face, you'll definitely appreciate what Michael Phelps said about Boomer's potential swimming career.

Growing up with a super successful parent can be daunting, especially if you grow up in the public eye. When Boomer was born in May 2016, fans immediately compared the baby to Phelps, wondering if Boomer would have his own collection of Olympic medals one day. And to be fair to those curious fans, Phelps does share a lot of photos of Boomer in the pool — in fact, almost every photo of Boomer involves water.

That being said, Phelps' many pictures of Boomer enjoying some pool time is not an indication that he's training Boomer to be an Olympic swimmer. According to Phelps, Boomer simply loves being in the water. Phelps explained, according to ET Online:

[Boomer] loves being in the water. [At the house], we were both lying on our stomachs just kicking our feet [in the pool]. He loves being outside.

Phelps went on to add that he'll let Boomer decide if he wants to pursue a pro-swimming career. Phelps revealed, according to ET Online:

It’s going to be his choice no matter what. If he wants to swim, great. I’m not going to push him one way or another.

It goes without saying that Phelps' take on Boomer's future is incredibly refreshing. It's not that Phelps is apathetic about Boomer's future career plans — he's just being a supportive dad. Phelps is giving Boomer the opportunity to become his own person, and this proves that he's a thoughtful and considerate parent.

Although Phelps has a casual and low-key take on Boomer's future, there are some celebrity parents out there, like Jessica Biel, who are a bit more opinionated when it comes to their kids, and it makes total sense because of the industry she and her husband work in.

In a May interview, Biel revealed that she doesn't want her son, Silas, to become a musician like his famous dad, Justin Timberlake. Biel explained that while Timberlake now enjoys a successful career in entertainment, he endured a long and hard road to get there, which is an experience she doesn't want Silas to also go through.

Biel explained, according to Refinery29:

I already have this image of [Silas] as a struggling musician and that’s like, ‘Oh my God!’ As a mom, you think 30 years into the future and you’re like, ‘How do I fix this for him?’ I just want him to be like an engineer or a doctor, something like that.

If you're surprised by Biel's take on Silas' potential career as a musician, you shouldn't be — a lot of celebrity parents would rather have their kids succeed outside of the entertainment world. It's important to note, however, that a lot of these concerned celeb parents just want their kids to be happy and fulfilled at the end of the day, no matter what path they choose.

I would persuade them probably not to do it. My dad told me the same thing. It’s a tough business for sure, and it’s very competitive and takes a lot of your time. But at the same time, I can’t imagine doing anything else. So if they were that passionate about it, I would be super supportive.

John Krasinski echoed Rhett's take, explaining that he'd support his daughter in whatever it is she wants to do. Krasinski said, according to POPSUGAR:

I definitely feel like this is a tough business for sure. I know I won the lottery. I was a waiter before I got The Office, and after the pilot, I went back to waiting tables because I just thought, 'This will never be real.' It's still not. I think it's all about supporting what she wants to do. If she understands what she wants and why she wants it, then that's great.

Yep, Phelps is definitely not alone in how he wants to raise Boomer. Phelps and many other celebrity parents just want their kids to figure out their ambitions on their own and do what they love. Although there's nothing wrong with encouraging your children to enjoy what you care about (shared interests can be great) it's also important to encourage children to carve out their own path.