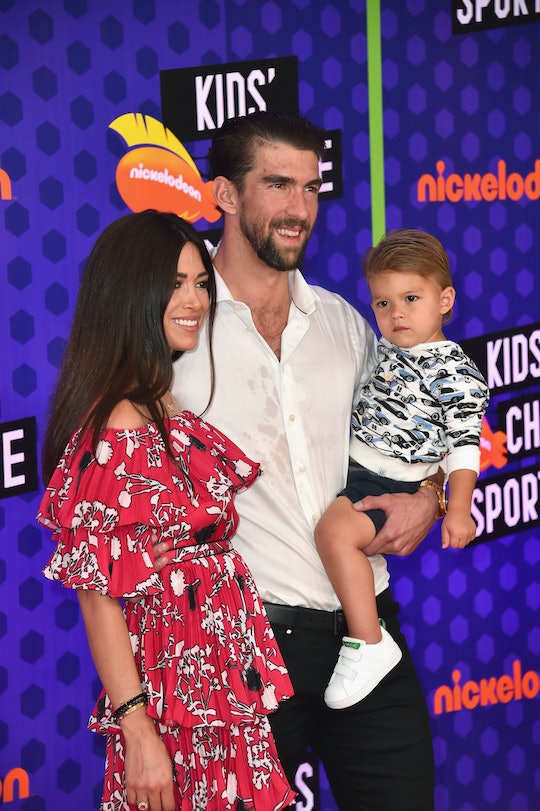 Just when you thought one family couldn't possibly get any cuter, they surprise the world with an exciting pregnancy reveal. Congrats are definitely in order after superstar athlete Michael Phelps and his wife Nicole revealed they’re expecting their third child. The happy couple shared the news on Sunday evening with the cutest announcement on Instagram.

Featuring their two children and a balloon sign reading “baby,” Phelps captioned a photo on Instagram: “#3 on the way! Cant wait to see the journey that this takes us on!!! #luckyman #boyorgirl #P3.”

Phelps is the most decorated Olympian in history and that same drive to impress must follow him into everything he does, based on this announcement. Not only was it posted to his IG account, but photos and announcements also showed up on the accounts of his wife, Nicole, and those that they run for their two sons, Boomer, 2 years old, and Beckett, 13 months old, according to People.

“I asked mom for a new baby for Christmas last year and .... well my wish finally came true!!! I wonder if I’m gonna have little brother or a little sister? #P3,” they captioned Boomer’s post, while “I’m not sure what this means but I was just told I’m promoted to Big Brother!! #P3,” read Beckett’s.

Phelps commented to Parade in 2018 on his growing family, saying that he and his wife wanted to keep siblings close in age.

"This is something Nicole and I always talked about was having kids close in age. They’re able to grow up together," he told Parade at the time.

The expectant dad also told TODAY that he realized that adding more to the family would greatly change the dynamics. "Having two, it's probably going to be a big change and it will be challenging. But it's something Nicole and I are looking forward to." No doubt they're also excited about baby number three and the changes that will bring to their home.

One of the parenting hacks Phelps always seems to get quizzed on is how to teach kids to swim. USA Today reported on a Facebook live video during which he answered a question about the matter. In it, he said, "Just teaching the basics and finding the right instructor. We have swim schools in every state. With my programming it's basically just teaching kids how to swim exactly like I did. I was somebody who didn't like putting my face in the water and was kind of afraid to swim so I started on my back. So there are different techniques you can try."

Regarding everything else about parenting, Phelps admitted to People that he and Nicole are learning as they go, as all parents must. "It is difficult, but you just figure it out and make it work. That is what you do as parents. There is no manual on how to do it. You figure it out along the way.”

Big congratulations to this adorable family on their exciting news. Fans will be watching for more news in months to come.