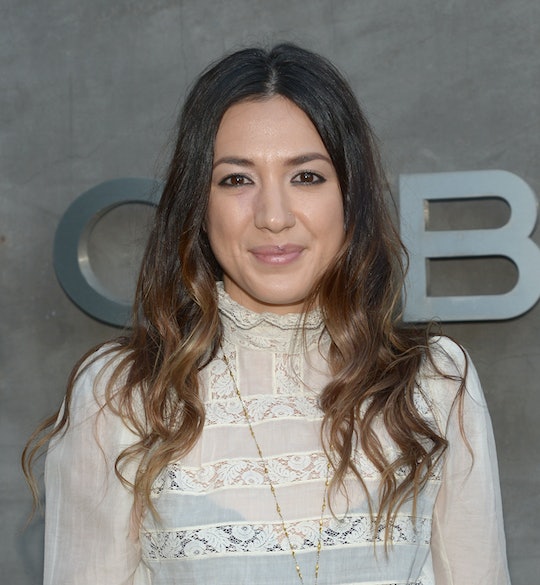 When baby's gotta eat, baby's gotta eat. At least, that's this musician's take on new motherhood. This week, Michelle Branch shared a breastfeeding photo from her wedding day and it has sparked a conversation about modern motherhood. The photo has been met with an overwhelming amount of support by fans who are happy to see real life portrayed so artistically and well.

Though it shouldn't be surprising, Branch shared a gorgeous photo from her wedding to Patrick Carney last weekend. The couple share a son together, Rhys, who they welcomed in August of 2018, according to E! News. In the photo — snapped by photographer Katch Silva — Branch is seen sitting in the front row of the seats which appear to be at her wedding ceremony. It is before any guests have arrived, but Branch is perched on a chair with her gown and veil draping across the floor, holding a what appears to be a wine glass in one hand, and nursing her son with the other.

Of course, there are so many layers of wonderful here, it's hard to even unpack it all. The sweet juxtaposition of a woman happily and proudly breastfeeding in a setting that is already imbued with so much expectation and judgment (a lot of people are still closed to the concept of even having children before you're married).

Branch shatters so many archaic social expectations with this one photo, and yes, that includes the wine.

Though most of the comments were overwhelmingly supportive, as tends to be the case on social media, some people were skeptical about her apparent consumption of alcohol while breastfeeding. However, others set the record straight, explaining that the CDC does say that one alcoholic beverage per day is safe for a breastfeeding mother, and of course, the given that "alcohol levels are usually highest in breast milk 30-60 minutes after an alcoholic beverage is consumed," it means that having a drink while nursing would suggest that you'd have plenty of time to process before the next feeding.

It's important to note we don't technically know if Branch is indeed holding a glass of wine (it could just be a glass) and we also don't know how much, if any, she's drinking. And most importantly, it wouldn't be anyone's business if we did.

Thankfully, many fans shared their support and acknowledged the sweet moment. "You, this dress, your beautiful face, this image... you were/are the embodiment of elegance," one comment read. Fellow musician Jewel commented and said: "Goddess level," while Christina Perri added: "Ah, this is the best."

As though it weren't all sweet enough, it's clear that Branch has found her happily ever after with Carney. In an interview with Billboard in 2017, she opened up about how they met (working on her last album) and how she realized they were "falling in love." Spoiler alert: Carney remembered her from her reign as a 2000s alt music goddess, but the pair agreed that they needed some time to mature before their relationship could have come to fruition.

“Pat has said, ‘I ­remember seeing you on MTV in the early 2000s and ­thinking you were really cute,’” Branch told Billboard about her now-husband. “It’s like, why couldn’t we have just met each other in our 20s? We would have saved so much heartache! He said that we probably would have f—ed it up. And yeah, we ­probably would have.”

Either way, it seems that the couple is blissfully together now, and living out their happily ever after, breastfeeding in wedding dresses and all.

More Like This
If Breastfeeding Makes You Tired, Here’s How To Keep Your Energy Up
13 Nursing Bras & Pumping Bras You'll Actually Love To Wear
Can You Mix Breast Milk & Formula? Experts Weigh In
Kylie Jenner Is Unbothered By A Little Breast Milk Leaking On Her T-Shirt