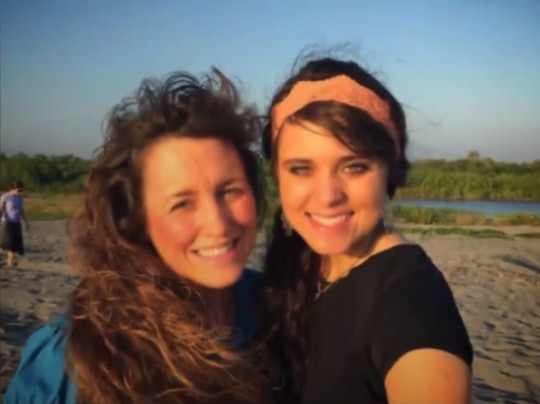 In early January, Jinger and Jeremy Vuolo announced that they're expecting their first child, proving the only constants are death, taxes, and Duggar babies. It seems like her sisters are having babies every couple of months, but for another take on what the reality star might have to look forward to in a few months, let's revisit Michelle Duggar's birth story with Jinger, because you just know she put the mother's curse on all her kids, condemning them each to grow up to have a kid just like they once were. No judgement; that's what moms do!

Jinger was the sixth of what would turn out to be 19 children for Michelle and Jim Bob. Plenty of moms can attest to forgetting the hairiest details of their kids' births even if they've only had a couple; that's how they get tricked into going through it again. But it looks like Mother Nature knew that nothing would stop the Duggars from having all the babies, so she didn't bother to wipe Michelle's memory, Men in Black-style (or Hermione Granger-style, if that reference is too old for you).

Michelle recounted the entire story in a memoir she and Jim Bob cowrote in 2009, entitled (take a deep breath) The Duggars: 20 and Counting! Raising One of America's Largest Families — How They Do It:

After five children, we felt confident we knew how my body handle the birthing experience, and we had heard many positive stories about families whose babies are born at home. The more we heard, the more appealing it sounded.

That's right, the matriarch of the poster family for home births didn't even have one herself until her sixth baby. To be honest, though, she was pretty much a professional laborer by that point. Still, the Duggars enlisted the help of a midwife, and a friend of theirs who happened to be a medical doctor volunteered to oversee the whole ordeal, which is more than her daughters opted for when they started breeding. She makes it sound like a dream, which might have something to do with the fact that it became such a trend:

How different the home birth was! I was able to walk around, lean against the wall or counter, and move with the contractions rather than lying flat on my back in bed throughout labor. The midwife shared some really helpful tips and techniques.

It's important to note, however, that Jinger's birth took place in 1993. These days, most — if not all — modern hospitals are much more flexible when it comes to birth plans. It really all depends on the facility and doctor that you choose. Some even offer amenities like bathtubs and yoga balls, or allow you to push while standing up, if that's your thing. And I can tell you from personal experience that every time I've ever visited a maternity ward, I've witnessed at least one laboring woman taking laps around the corridors.

Back to Michelle's story:

[The midwife] suggested that I not raise my voice or purse my lips with the pain of each contraction. Instead, she told me to breathe low and moan slowly, "like a cow," she said with a laugh. By keeping my voice and my facial and throat muscles calm and steady, I kept the muscles throughout my body relaxed, and soon little Jinger was right there in my arms, ready to join the Duggar clan.

Afterwards, mom and baby took an herbal bath together, and just a short while later, Michelle wrote, she was standing and walking. When her friends stopped by to visit, they couldn't believe she'd just given birth, and she was equally amazed. She chose home birth for her seven child, Joseph, as well, but a medical complication caused some excessive bleeding, so she returned to hospital births for the rest of the kids. Ultimately, she concluded, she prefers hospital deliveries for safety reasons, but she always seeks out a doctor who will let her do what she needs to do. It sounds like out of 19 births, Jinger's was the easiest, so let's hope Michelle did put that curse on her, after all!