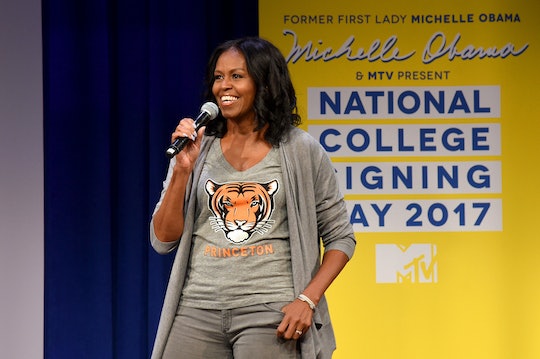 The Trump administration has been in the White House for just a few months, but it's already taken significant steps to dismantle former first lady Michelle Obama's healthy food movement. The U.S. Department of Agriculture recently rolled back healthy school lunch standards, and the Food and Drug Administration has pushed new calorie labelling efforts off until next year, according to Vox. For a while, Obama held off on commenting about the new changes, but on Friday, Obama criticized the Trump administration's school lunch changes — and she did not hold back.

"Think about why someone is OK with your kids eating crap," Obama said at an health conference in Washington, D.C. on Friday, according to NBC. She continued:

You want to talk about nanny state and government intervention, well, 'you just buy the food and be quiet and you don't need to know what is in it.' That is essentially what a move like this is saying to you moms.

During her years in the White House, Obama worked to try and bring the United States' high levels of childhood obesity down. She helped create the non-profit organization Partnership for a Healthier America, launched the Let's Move initiative, and lobbied lawmakers to pass the Healthy, Hunger-Free Kids Act — which implemented healthy guidelines for school lunches — in 2010, according to Reuters. She defended that work staunchly during the conference.

"The numbers were real. This wasn't 'fake news,'" she said. "Obesity rates are rising and continue to rise among our youngest. We're seeing kids have higher rates of stroke, heart disease, diabetes — these are real numbers — asthma, all things preventable illnesses."

Obama said attempts to make American kids healthier was called parenting, not politics, and encouraged parents to take action. "Moms, think about this," she said, according to the Associated Press. She continued:

You have to stop and think: 'Why don't you want our kids to have good food at school? What is wrong with you and why is that a partisan issue?' Why would that be political? ... If somebody is doing that, they don't care about your kid and we need to demand everyone to care deeply about our kids.

Despite the changes the current administration has already made to Obama's health food policies, the former first lady ended her talk by promising parents that she would continue working with them to improve kids' health. Obama may have left the White House, but it seems like she's far from done when it comes to advocating for children's well-being.