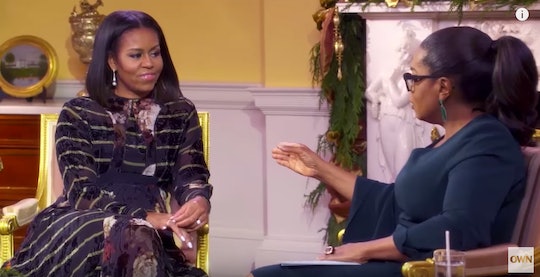 Michelle Obama Didn't Say Trump's Name During Her Oprah Interview, & It Was All Class

Outgoing First Lady Michelle Obama has a lot to be proud of: she's been one of the most active first ladies in U.S. History, and has a list of accomplishments all her own from the Obama's White House tenure, of which she can be proud. She gave an exit interview in the White House to Oprah Winfrey that was very somber; a reflection of the times rather than of her achievements or reflecting on her time in the White House with her family. As for current events, the ever-classy Michelle Obama still didn't say Donald Trump's name during her Oprah interview — and she's got more self-control than a lot of people in Washington.

Oprah conducted the interview with the first lady in the Yellow Room at the White House on Dec. 14, an exclusive for her network OWN. Oprah's team shared clips from the interview on her YouTube page on Monday. The first clip shows Oprah asking the first lady about the rumors (and hopes) circulating that the Obama family won't entirely leave politics: namely, that Michelle will run for office herself. The first lady acknowledged that people might be hopeful, but also was very clear that she had no intention of running for any public office — especially not president. She made a point of assuring the public that if it was something she was even considering, she wouldn't have been "coy" about it, and that she "doesn't believe in playing games." ‌

‌She was also very forthcoming about her reasons why not, most of which concerned her family: the high profile political life "requires a lot of sacrifice" and Michelle doesn't think any family is immune to the struggles. "People don't understand how hard this is," she said, "It's not something you just cavalierly ask a family to do again."

She doesn't explicitly mention the incoming presidential family — the Trumps — by name, but she does allude that "at any age" the lives of the president's family come to a halt for the term of the presidency. "The next family that comes in here, every person in that family, every child, every grandchild — their lives will be turned upside down in a way that no American really understands." ‌

When asked if she had regrets about her time in the White House, the first lady admitted that she wished they could have done more about gun violence. "We have spent so much time mourning with so many families," she told Oprah, "You want to talk about one the hardest things that it is to do, is to look mothers in the eyes who had just had their babies shot...it never gets easy."

As of June 2016, there were 14 mass shootings in the U.S. during Obama's presidency, and more than 300 people died in those shootings.

The first lady made the most direct commentary about the incoming Trump administration – still, without naming names — when she acknowledged the tensions emanating from the next administration. The first lady said that hope was not just the touchstone of her husband's political campaign, but his presidency: and that the distinct lack of hope now has helped her see just how much good the Obama administration did during its eight years:

We feel the difference now. Now we're feeling what not having hope feels like. Hope is necessary. It's a necessary concept. And Barack didn't just talk about hope because he thought it was a nice slogan to get votes. He and I and so many believe that — what else do you have, if you don't have hope? What do you give your kids if you can't give them hope?

The first lady gave a pretty apt parenting metaphor, one that anyone with small children knows by heart: she explained that the country looks to their president in a crisis the way that a little kid looks to their parent if they get hurt. A small child who takes a tumble looks to their parent to decide if they should be upset or afraid. How a parent responds in that moment determines how secure the child feels, and helps them understand. The first lady said that it's similar to how the American people look to their leadership during difficult times, and that President Obama has always tried to remain calm and act in hope.

Oprah also asked the first lady some more personal, less political questions about how she feels after spending eight years of her life and public service career in the White House. The first lady responded with not just what she'd learned about herself (with arguably the understatement of the year), but with an important message to young woman everywhere:

Maybe it's something that we as women, we as minorities, sort of — we underestimate in ourselves and that is. . .I'm pretty smart. I work pretty hard. I'm good at what I do. I have really good instincts. I have great ideas. And I can execute [them]. I say that out loud, because we as women don't pat ourselves on the back. We're always sort of deferring. . .we seed our power so easily. I want young girls out there to know — live out loud! And understand that what's in your brain is really useful. Do not hide it, don't dumb it down, don't apologize for it. Just put it on the table and let people deal with it. Because we silence ourselves.

Even if Michelle Obama is ready to be out of politics and the public eye, there's no doubt that whatever cause she lends herself to next will be extraordinarily lucky to have her, and those who interact with her will be all the better for it.