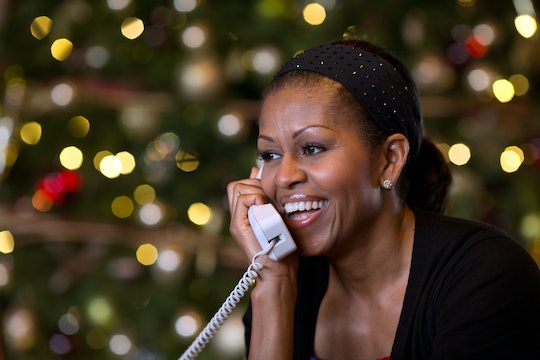 Michelle Obama Says Parenting Was Easier With Landline Phones & She's So, So Right

It's safe to say that many people already know Michelle Obama is a wise woman, but when she sat down with Shonda Rhimes at the Pennsylvania Conference for Women this week, she proved that she basically knows everything. The former first lady and the creator of television hits such as Grey's Anatomy and Scandal talked about a number of topics, but when they hit parenting and technology, things got really real. Michelle Obama joked that parenting was way easier with landline phones and she's so right. Heck, everything was easier with landline phones.

The Obama parents famously trust their daughters, as they should. Once upon a time, President Barack Obama said that he's not into the gendered stereotype of being an overprotective father to teenage girls. He said he had two reasons for being "pretty relaxed" about Malia and Sasha going out with romantic partners. According to ABC News, Obama said:

One is [my wife] Michelle — she's such a great example of how she carries herself, her self-esteem, not depending on boys to validate how you look or not letting yourself be judged by anything other than your character and intelligence. Hopefully, I've been a good example in terms of how I show respect to my wife.

The other was Secret Service, of course. However, Michelle says that even with good values and security, she wishes she knew more about her daughters' love lives. And a landline would really help.

According to HuffPost, the former first lady told Rhimes:

Gone are the days when the [landline] phone would ring ― you remember that? ― in your house. And you would pick it up and someone would say, "Hello, Mrs. Such-And-Such. My name is Blank, and I’m calling to speak to Malia." And you’d go, "This is the person who’s talking to my daughter" ― boy, girl, whatever.

Malia and Sasha are pretty young, so it's more likely that their friends, not dates, were calling, but the idea is the same. Landlines were a way for parents to get at least a glimpse into their kids' lives. They could also control when and where these conversations were had.

My mom, for example, used to ban the portable landline from my bedroom, lest I stay up all night talking to my first middle school boyfriend. (Or let it run totally out of battery, which I suppose I can admit totally happened all the time now that I'm older.) I always thought my mom was trying to actively ruin my life for making her rules, but now that I know Michelle would approve, I have to give her some credit.

The landline phone also made it more difficult for kids to get into too much trouble. You had to really think about whether you needed to call your BFF around dinner time or just after prime time TV transitioned into late night and whether it was worth annoying their parents or getting them in trouble. Landlines also made it simpler for parents to figure out what was going on with their kids' social life. They could hear a friends' voice and make all sorts of assumptions about whether or not things were OK.

Even Obama can't keep up now that her girls live on their smartphones like the rest of us. She said, “There are friends that I don’t know they have,” she said, according to HuffPost. “And they’re shocked when it’s like, ‘I’m going to Such-And-Such’s house,’ and I’m like, ‘Who’s that?’”

Such is life with cell phones. Now teens can hole up on their own with their text messages, social media profiles, even fake social media profiles, and communicate with their entire school. Really, who knows what's going on these days? Change is good though, and there are tons of reasons to not miss the days of the landline phone. But when it came to parenting, they sure had their perks.