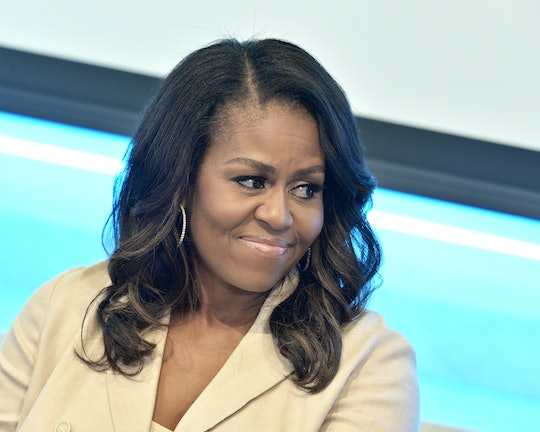 In case you're not already familiar with the sad news, Boyce died on Saturday at his Los Angeles home at age 20, as ABC News reported. The actor died as as the result of a seizure, following what his family described as an "ongoing medical condition."

But while the Disney star's life was cut tragically short, Boyce seemed to have made a remarkable impact on the world and its major players during his life, including Obama. Joining such stars as Adam Sandler, Selma Hayek, and James Charles in paying tribute to the freckle-faced, energetic star, Obama took to Instagram Tuesday to share her own condolences.

"I was lucky enough to share a few moments with Cameron Boyce — on set, at the White House, and on a service project," the bestselling author captioned a sweet photo of herself and Boyce. "Enough time to recognize that not only did he have incredible talent, but also an incredible heart. Sending out a lot of love and hugs to his family, friends, and his many, many fans."

Fans seemed grateful that Obama, who met Boyce in 2014 when she appeared on the now defunct Disney show, Jessie, took time away from her recent travels and busy schedule to mourn the loss.

"You know you made an impact on the world when the First Lady shares a post about you," wrote one fan.

Another praised Obama for taking an interest in children's lives, writing: "I loved the episode with you on Jessie! You were always willing to be part of kids lives — even through their favorite tv shows. Cameron Boyce’s sweetness, humor, intelligence and talent will be deeply missed!"

A third fan chimed in, "Mrs. Obama you are a good person with a big heart..."

Someone else added, "This was so beautiful of you to do. THANK you for being you & happening in my lifetime."

It's also possible that Obama felt compelled to speak out because she's a parent herself. When tragedies like this hit, for instance, it can make parents think about the fragility of life and the quick passage of time. Speaking from my own perspective as a mom, I was shocked to learn that Boyce was 20 at the time of his death — I guess I still think of him as the young boy my kids used to watch from the comfort of our old blue couch. I'll admit, this loss hits hard.

At least I was comforted, as it seemed others were too, by Obama's heartfelt and genuine tribute to Boyce's legacy. Obama appears to understand what a loss this must be for Boyce's family and friends, and it's touching that she took time out of her very busy life to pay her respects.