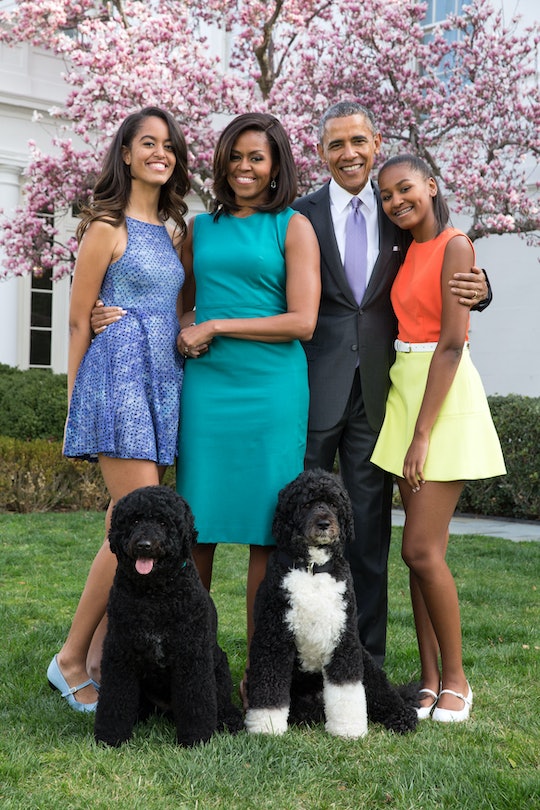 Now that my two oldest have hit their teens, if I have questions about where they are going, such as names of parents and a cell where they can be contacted, my kids call me "overprotective." Well, my girls have no idea how bad the helicopter parenting can get. Case in point: Michelle Obama recently revealed that Malia and Sasha attended sleepovers with an armed security detail during the family's time in the White House. As one might imagine, this situation was a tad tricky and awkward for the former first lady to deal with, but she handled it with the perfect dose of humor.

More Like This
The Obamas’ New Family Rule? Get Vaccinated If You Want To Hang Out With Us
Halle Berry Shared A Beautiful Throwback Pregnancy Photo On Mother’s Day
Ben Affleck Shared A Cute Halloween Photo With Jennifer Garner & Their Kids On Instagram
Meghan Markle & Prince Harry Celebrated Mother's Day With A Generous Gesture

Now that Mrs. Obama is no longer first lady, she has begun to share more behind-the-scenes details about her experiences parenting two daughters in the White House. On Saturday during an interview with CBS This Morning's Gayle King, for example, Obama revealed that it was difficult at times to raise her daughters during their dad's tenure as leader of the Free World.

Knowing firsthand how prickly other parents can be, I can't imagine how these conversations went, but Obama retells it all in such a funny way, it seems clear that if any mom could navigate trying to let their kids blend in, it would be this activist and bestselling author.

Obama also joked about having to inform the parents of her daughters' friends that their houses would be guarded around the clock during these aforementioned sleepovers.

"And, uh, thank you for having Malia and Sasha over," she added. "'Oh and by the way, there is going to be a man with a gun sitting outside of your door all night. If you let him use the bathroom, it would just be nice'....I'm surprised my kids have any friends, you know?" Hilarious. I'm just glad to hear that Obama was able to navigate this tricky situation with grace and humor.

It's worth noting here that the Obama girls had plenty of time to adjust to life in Washington, as they arrived there when they were just 9 and 6, as Business Insider noted. For a total of eight years, Sasha and Malia had to deal with public scrutiny, which means they're probably pros when it comes to dealing with awkward social situations, like having an armed detail accompanying you to a friend's birthday party, for instance. And there's a good chance that their thick skins have come in handy, as they're still a hot topic of conversation today.

Obama, who described herself and the former president as "empty nesters," (Malia and Sasha just turned 21 and 18 respectively, according to Yahoo! News) were heavily photographed during a recent vacation to the French countryside. Although this arguably isn't as bad as having guards attend your playdates, it can be tough to enjoy your life when under a microscope.

That being said, it sounds like the always funny and graceful Michelle Obama did her best to make Malia and Sasha's childhoods as "normal" as possible. She clearly did something right, awkward mom conversations and all.