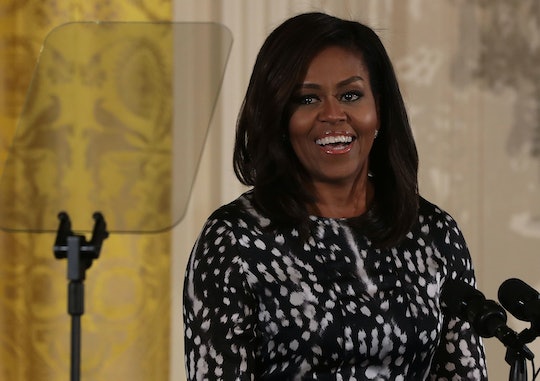 Getting politicians to answer questions honestly can be a near impossible task, but what about their wives? During a recent interview on The Tonight Show, Michelle Obama was asked about Trump's inauguration. And her response, although short, perfectly captured almost everybody's feelings. You've got to love Michelle Obama for her honesty!

Lately, Obama has been traveling quite a bit for her book tour. Becoming, Michelle Obama's memoir, documents all of the experiences that have shaped her, as summarized by Amazon, from her childhood on Chicago's South Side to her years as an executive and her time in the White House.

The memoir started out a hit, selling more than 1.4 million copies in its first week. In fact, Barnes & Noble announced that the release of Becoming gave the bookseller "the biggest first-week sales of any book this year", as reported by CNN.

Since Becoming discusses some of Obama's experience as the nation's First Lady, it's no surprise that she's going to get a question about her husband's successor, President Trump.

Michelle Obama is usually pretty diplomatic with her answers, but she decided to get a little more honest during her appearance on the The Tonight Show while talking to Jimmy Fallon.

Jimmy Fallon showed the audience a picture of Michelle and Barack Obama waving to crowds as they board Air Force One for the last time and left Donald Trump's inauguration. All Fallon could get out was, "Can you just, walk me through..." before Obama interrupted with her response.

"Bye, Felicia," Obama said and the audience busted out laughing.

If you're familiar with the 1995 classic Friday, then you know where Obama's response is coming from.

"Is that what was going through your mind?" Fallon asked.

Obama elaborated a little on her previous answer, telling Fallon, "A lot was going on that day. That was a day ... Then the Tiffany's box. It just all, you know, a lot."

People wondered what was inside of the box for a long time. When Michelle Obama appeared on The Ellen DeGeneres Show, she confirmed that the gift was "a lovely frame".

It might seem like a sensible gift, but protocol made it interesting. You never really see people give each other gifts at events like that, so nobody was actually prepared for it to happen.

"I mean, this is like a state visit, so they tell you that you're going to do this, they're going to stand here," Obama told the audience, "Never before do you get this gift, so I'm sort of like, 'OK, what am I supposed to do with this gift?'"

"Everyone cleared out", according to Obama, "and no one would come and take the box." Eventually, her husband stepped in to help out and took the box inside.

Luckily, Obama's The Tonight Show appearance wasn't all about Trump. She joined Fallon for one of his elevator surprises. Tourists thought they were heading to the top of 30 Rockefeller Center, but first got a surprise when the doors opened to reveal the two jumping rope, singing holiday songs, and goofing around.

Since people usually see Obama acting relatively serious, that clip is pretty memorable. But, nothing will be quite as memorable as Obama's totally honest remark about Trump.