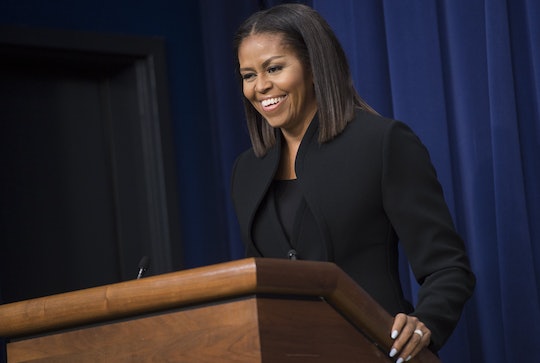 Having a powerful, strong, passionate female role model is something every little girl needs, and for the past eight years, girls around the world have been blessed with one of history's best female role models as she stood and fought proudly next to her husband while he led the free world. Michelle Obama has been showing girls and women everywhere that their goals are important, their dreams achievable, and their presence wanted, all while being smart, kind, determined, and basically just a badass herself at the same time. She has launched important initiatives such as Let Girls Lean, Let's Move, and Reach Higher — all aimed at providing the best opportunities to youth around the world. The first lady has also become well-known for her ardent speeches, many of which center on ideals and morals that mean the most to her, and picking ten of Michelle Obama's best speeches from over the years wasn't easy, to say the least.

But with Jan. 20 quickly approaching, the Obamas' time in the White House is coming to an end. The current first family has been a source of hope and love for many Americans during President Obama's two terms, and to say that they'll merely be missed would be a vast understatement. The Obamas as a family have come to represent class, grace, brains, and more to millions across the nation, and seeing them leave the White House will likely be tough. Mrs. Obama, with her sky-high goals and "Go high" motto, in particular, will be hard to part with.

So to honor the first lady and her family, I've pulled together this list of Mrs. Obama's finest speeches she's given during her time as first lady. Prepare to be inspired (and maybe grab a box of tissues):