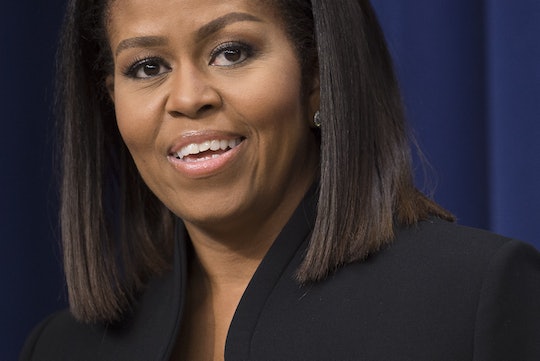 On Monday night, Michelle Obama sat down for her last interview as first lady of the United States with Oprah Winfrey. The two women talked about a lot of things, but Michelle Obama's "angry black woman" response, referring to comments made about her personality, prove that she's always about going high when haters go low. Talking about being called an "angry black woman," the first lady told Winfrey, "That was one of those things that you just sort of think, dang, you don't even know me, you know? You just sort of feel like, 'Wow, where did that come from?'" Mrs. Obama added, "You think, that is so not me! But then you sort of think, 'well, this isn't about me.' This is about the person or the people who write it."

Winfrey nodded in agreement. Mrs. Obama went on to say that comments like that are about fear of other people. "We are so afraid of each other, you know?" the first lady said. "Color, wealth, these things that don't matter still play too much of a role in how we see one another. And it's sad, because the thing that least defines us as people is the color of our skin, the size of our bank account. None of that matters."

Oprah responded to the first lady saying, "That's what Maya always used to say to me." (We can only assume means Maya Angelou. Seriously, if Maya Angelou gave you advice on how to deal with angry commenters, then there's really no way to go but up.)

The first lady went on to explain that she combatted those comments by living her life "out loud," which is something Winfrey has always been a fan of. "It's our values, it's our lives, " Mrs. Obama explained. "And you can't tell that from somebody's race, somebody's religion. You have to act it out."

Anyone who knows anything about Oprah knows she is all about this.

Mrs. Obama said that she hopes that by living her life "out loud" she can inspire young people to do the same. "Just live your life," she said.

Can we get a round of applause? There are a lot of people in this world who, when criticized or judged, dig their heels in and get angry. Instead, the first lady (and Oprah, of course) knows that that is no way to live. You can't let others tell you all about yourself before they even know who you are.

So the next time you're down and out because of someone saying something terrible about you — like pigeonholing you into some awful racial stereotype like an "angry black woman" when you're clearly nothing of the sort — take the first lady's advice and live your life. It's pretty good advice.