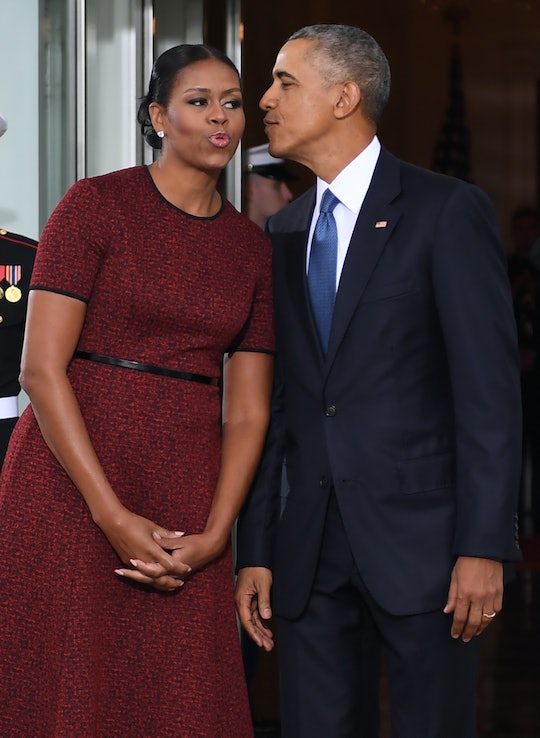 On President-elect Donald Trump's Inauguration Day, several people were less excited to see him sworn in, but luckily, they could take solace in one thing: Michelle Obama's inauguration face memes, which were absolutely glorious. The first lady's expression as she accepted a gift from the new first lady, Melania Trump, was definitely meme-worthy, and clearly summed up the feelings of many during today's transfer of power.

At the White House, Melania handed Michelle a blue Tiffany & Co. box, which Michelle accepted with a slight eyebrow raise at the camera. Whether that look was given on purpose or not remains a mystery, but it led to a bunch of fantastic memes. Soon after the exchange, according to Us Weekly, President Obama passed the box off to an aide, saying, "Hold on a sec, we will take care of protocol." The two couples then took an official picture together.

The overall sentiment from the public seemed to be that Michelle's look represented many, many American's feelings about the inauguration and incoming President-elect Donald Trump. Some posted pictures of Michelle's face with a caption that simply said, "Same," while others imagined exchanges between Michelle and former Secretary of State Hillary Clinton. Here's a small sampling of the best memes out there:

Before the inauguration took place, People reported that the Trumps and the Obamas had tea at the White House as the new first family was welcomed in. Then, the two couples left to the inauguration together. During the ceremony, Obama and Michelle sat near the Trumps, exchanging pleasantries and congratulations throughout the event.

After Trump took the presidential oath of office, however, Obama and Michelle handed over the reigns of the White House to the Trumps. Now, with all of their first family duties completed, the Obamas will be taking off to Palm Springs, California for a little rest and relaxation, according to NBC. And after that?

"The work of perfecting our union is never finished, and we look forward to joining you in that effort as fellow citizens," Obama told the public in a video published on Friday, according to NBC.

"First, we're going to take a little break," Michelle added in the video. "We're finally going to get some sleep and take time to be with our family. And just be still for a little bit."

On Twitter — where Obama's handle has switched from @POTUS to @POTUS44 — Obama tweeted: "It's been the honor of my life to serve you. You made me a better leader and a better man."

Here's to a bit of downtime for the Obamas, and perhaps a few more memes from the internet, in the coming days.