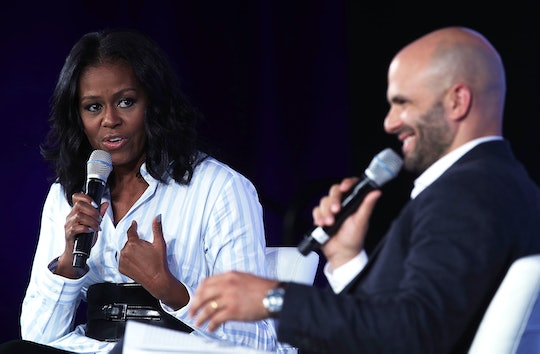 As you're more than likely already aware, today is Mother's Day. It's a day of celebration for most, but also a day of reflection for many, as well. (And if you've been avoiding social media for the day, it's totally understandable.) Most celebrities and public figures have taken the opportunity to post a sweet photo and caption celebrating their moms today, and while they're all lovely, there's one in particular that you should definitely check out. Because Michelle Obama's Mother's Day post will make you miss the former first lady more than ever.

Alongside an adorable photo of the former FLOTUS embracing her own mom, Obama wrote a simple, yet poignant caption. "Happy #MothersDay to my mom," she began. "I strive to be the kind of mother to my girls that you have always been to me." There was no exorbitant use of exclamation points, no cutesy emojis, just two simple sentences, bold and true.

Many moms start out motherhood feeling a little lost or confused. But having a mom, or any strong, maternal figure, to look up to for guidance and inspiration can make even the incredibly daunting task of parenthood much less stressful. And while the new FLOTUS certainly has her own merits, Mrs. Obama's way with words is seriously missed in the White House, along with just about everything else about her.

Both Mrs. Obama and her husband, President Barack Obama, have remained pretty active since they left the White House in January, following a much deserved vacation, of course. Not only did the couple start the Obama Foundation, with the mission to "create an engaging and welcoming place that will inspire people globally to show up for the most important office in any democracy — that of citizen," but they have both been outspoken on the issues about which they care most.

In a recent sit-down with the Partnership for a Healthier America, the former first lady made it abundantly clear how disappointed she was in the Trump administration's roll-back of one of her own mandates: nutrition standards in school lunches. "You have to stop and think, why don't you want our kids to have good food at school?" Obama questioned. "What is wrong with you, and why is that a partisan issue?"

Really though, no matter what Obama is talking about — be it her mom, her kids, her husband, or providing children healthy lunch options — she always manages to hit the nail right on the head. Hopefully, she's leading a much more relaxed life now, but through her continued outreach and social media posts, one thing remains clear: Michelle Obama was truly a remarkable first lady, and though her presence in the White house is sorely missed, she's not pulling her inspiring posts from the public eye any time soon.