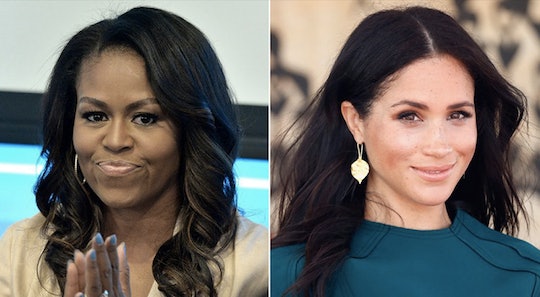 Unsolicited parenting advice is all too common, whether it be a person at the grocery store commenting on how you'll "spoil" your baby if you wear her all of the time or your relatives imploring you to "sleep when the baby sleeps," to name just a few frustrating examples. Most of the time, I just nod politely and take it with a grain of salt when these instances come up. However, Michelle Obama's parenting advice to Meghan Markle is something all parents should hear.

In case you missed the big news, the Duchess of Sussex served as the guest editor for British Vogue's 2019 September issue titled “Forces for Change," according to People. The honor is kind of a big deal, considering she's the first person to do so for the September issue during the 103 years the magazine has existed.

“These last seven months have been a rewarding process, curating and collaborating with Edward Enninful, British Vogue’s Editor-in-Chief, to take the year’s most read fashion issue and steer its focus to the values, causes and people making impact in the world today,” Markle said in a statement on Instagram on Sunday, July 28.

She continued: “Through this lens I hope you’ll feel the strength of the collective in the diverse selection of women chosen for the cover as well as the team of support I called upon within the issue to help bring this to light. I hope readers feel as inspired as I do, by the 'Forces for Change' they’ll find within these pages."

“When Malia and Sasha were newborns, Barack and I could lose hours just watching them sleep,” Michelle told the Duchess of Sussex of her two daughters with Barack Obama, according to Us Weekly. “We loved to listen to the little sounds they’d make — especially the way they cooed when they were deep into dreaming.”

The author of Becoming went on to acknowledge that "early parenthood is exhausting" (amen), while also noting there's “something so magical about having a baby in the house.” But it's the next part that completely resonated with me, with Michelle continuing:

Time expands and contracts; each moment holds its own little eternity. I’m so excited for you and Harry to experience that, Meghan. Savor it all.

On the surface, this seems like an eloquent version of, "Enjoy every moment." But to me, Michelle isn't necessarily imploring Markle to be thankful for the hard parts of parenting, rather, she's describing how time simultaneously seems to stand still and speed up after you have a child. And she's simply encouraging parents to soak up the deliciousness of it all before they blink and suddenly, their child is on to the next stage.

Granted, I would hang on Michelle Obama's words when it comes to advice for just about anything. Because she is that amazing. But to me, her parenting advice to Meghan Markle is a breath of fresh air and is something I think all parents need to hear.