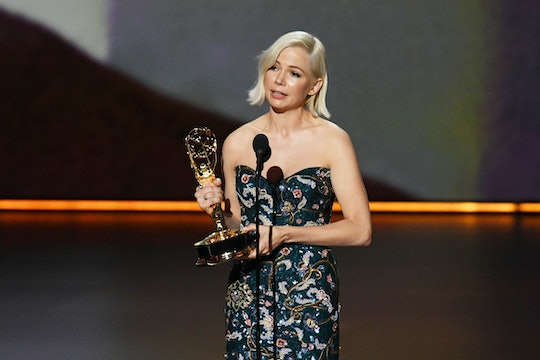 Michelle Williams picked up an Emmy award for Lead Actress in a Limited Series/Movie on Sunday night for her brilliant portrayal of dance legend Gwen Verdon in the FX limited series Fosse/Verdon. In her acceptance speech, she emphasized the importance of equal working conditions and pay for women. After seeing her passion and unending fight for equality, you know Michelle Williams' daughter Matilda Ledger has an amazing role model to look up to.

"I see this as an acknowledgement of what is possible, when a woman is trusted to discern her own needs, feels safe enough to voice them, and respected enough that they’ll be heard," Williams said on stage as she accepted her first Emmy. She noted when she asked for various things on the set of Fosse/Verdon — including more dance and voice lessons, better fake teeth, and a better wig — she always heard “yes.”

"All of these things they require effort and they cost more money, but my bosses never presumed to know better than I did about what I needed in order to do my job and honor Gwen Verdon,” continued Williams. “And so I wanted to say thank you so much to FX and to Fox 21 Studios for supporting me completely and for paying me equally because they understood that when you put value into a person, it empowers that person to get in touch with their own inherent value and then where do they put that value? They put it into their work.”

Williams went on to suggest that all women must be listened to and respected, so they're allowed to have a chance to truly grow. “And so the next time a woman, and especially a woman of color — because she stands to make 52 cents on the dollar compared to her white male counterpart — tells you what she needs in order to do her job, listen to her, believe her,” she said. “Because one day, she might stand in front of you and say thank you for allowing her to succeed because of her workplace environment and not in spite of it.”

At the end of her speech, Williams gave a special shout out to her 14-year-old daughter, whose father is late actor Heath Ledger. "Matilda," she said, "this is for you, like everything else."

Williams has been fighting for equal pay for years. As reported by Entertainment Weekly, the actress discovered she was making far less than her co-star Mark Wahlberg for reshoots of All the Money in the World. “In late 2017, the news broke that I’d been paid less than $1,000 compared to the $1.5 million that my male counterpart had received for the exact same amount of work,” she told the outlet. “And guess what, no one cared. This came as no surprise to me, it simply reinforced my life-learned belief that equality is not an inalienable right and that women would always be working just as hard for less money while shouldering more responsibility at home.”

Taking on the status-quo couldn't have been easy, but when talking to Entertainment Tonight at the 2018 Golden Globes, Williams revealed that her inspiration comes from Matilda, just as she did tonight. "I thought that I would have to raise my daughter to learn how to protect herself and defend herself against the world, and what I've realized is that it's actually possible," she said. "I believe it with all my heart — that we [can] hand our daughters a different world."

Williams' 2019 Emmys speech made for one of the most powerful moments of the night, and I'm sure it inspired moms everywhere to be the change their daughters need.