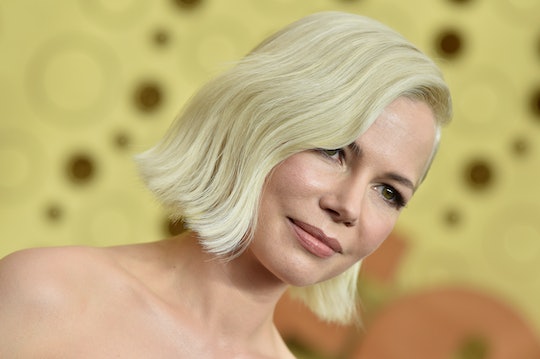 Although it hasn't technically even begun, it seems the new year is already shaping up to bring about some notable and exciting changes to the life of one Venom star. Actress Michelle Williams is reportedly pregnant and engaged to Hamilton director Thomas Kail, according to multiple reports.

An unnamed source has told People that Williams, who welcomed a daughter with the late Heath Ledger in 2005, and Kail are recently engaged and reportedly expecting their first child together. The source also claimed that Williams' 14-year-old daughter Matilda "played matchmaker" when it came to her mom's relationship with the 42-year-old Emmy-Award-winning director.

While neither Williams nor Kail have confirmed the news, People has reported that the pair were recently photographed holding hands in London, where 39-year-old actor is currently filming Venom 2. What's more, the news outlet noted that Williams was also spotted buying baby clothing at a maternity shop in Kensington. Romper has reached out to Williams' rep for confirmation.

While little is known about Williams and Kail's relationship, Parade magazine has reported that the two recently worked together on Fosse/Verdon, a television series Kail developed for FX with Steven Levenson. Could this be where Matilda set the couple up?

News of Williams' reported engagement comes less than a year after she reportedly split from then-husband Phil Elverum, an indie musician. In April, CNN reported that sources had confirmed Williams and Elverum had separated amicably at the beginning of the year after less than a year of marriage.

Williams, a notoriously private person, had shocked fans when she revealed to Vanity Fair that she and Elverum had been married in a secret ceremony in the Adirondacks sometime in July 2018 — before anyone had even known the pair were dating. At the time, Williams had described her relationship with Elverum as being "very sacred and very special," Vanity Fair reported.

Kail has also been married previously; according to Us Weekly, the film and theater director married actor Angela Christian in 2006 and the two are reported to have split sometime after December 2018, according to the tabloid.

For the moment, however, it's unclear how long Williams and Kail have been dating or far along Williams' pregnancy might be. What is clear, though, is that many congratulations are in order for the couple.