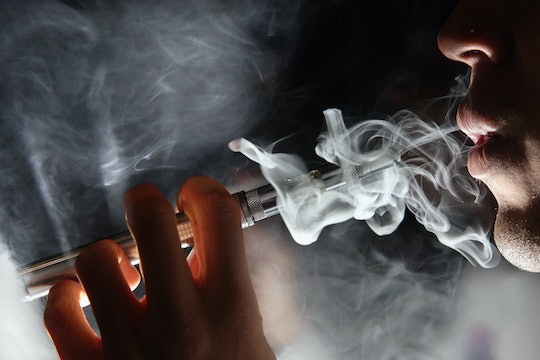 Banned E-Cigarettes Are Finally Being Banned In This State

Citing concerns about vaping's potential impact on youth health, Michigan became the first state to ban flavored e-cigarettes Wednesday. Using the state's administrative rules process, Michigan Gov. Gretchen Whitmer has instituted a six-month ban on all retail and online sales of flavored e-cigarettes, according to The Washington Post. Michigan's ban comes roughly a week after the state's health department announced it was investigating multiple cases of respiratory illnesses thought to be related to vaping or e-cigarette use.

"My number one priority is keeping our kids safe," Whitmer wrote in a tweet posted Wednesday. "Right now, companies selling vaping products are using candy flavors to hook children on nicotine and misleading claims to promote the belief that these products are safe."

But although the state's ban on flavored e-cigarette sales is slated to go into effect immediately, with retailers being given 30 days with which to comply, it may not end up lasting for the long haul. At the moment, the ban is only set to last six months, although there is an option to renew for an additional six months, The Washington Post has reported. Michigan officials reportedly plan to develop a more permanent ban on flavored e-cigarettes while the temporary regulation is in place, according to the paper.

In a statement released Wednesday, the American Vaping Association reacted to Michigan's ban by arguing Whitmer was merely seeking attention. "In this country, laws are made by legislators, not governors desperate for press attention," the non-profit advocacy group said. "Anyone who fears the prospect of an out of control government should be appalled by this attempt by the executive branch to unilaterally ban an adult product."

They warned that Whitmer's ban would result in users turning toward cigarettes or harmful black market e-cigarette and vape products. "This shameless attempt at backdoor prohibition will close down several hundred Michigan small businesses and could send tens of thousands of ex-smokers back to deadly combustible cigarettes," they said. "The [Centers for Disease Control and Prevention (CDC)] is now specifically warning against vaping homemade vaping products, yet this is the exact kind of behavior that a state-instituted flavor ban will lead to."

While Michigan is the first state to ban flavored e-cigarettes, they're not the first place within the United States to do so. Cities like San Francisco and Sacramento in California as well as Boulder, Colorado, have instituted bans on flavored vaporized tobacco products. What's more, federal agencies have also recently warned against youth and young adults using e-cigarette products of any kind.

Although the full affects of e-cigarette use are still unclear, recent research has found that youth are drawn to the sweet flavors in flavored e-cigarette products. Researchers from Yale University School of Medicine, for example, found that light cigarette smokers showed more desire for sweet flavors after exposure than they did to nicotine alone. A separate study that examined the use of flavored tobacco products among youth and young adults found that 75 percent of teen and young adults who vape said they would no longer do so if e-cigarette products did not come in flavors.

Whitmer has said she'd been spurred into instituting a ban on flavored e-cigarettes after the Michigan Department of Health and Human Services deemed youth vaping to be a public health emergency. "Our kids deserve leaders who are going to fight to protect them," The Detroit Free Press reported Whitmer said in a statement. "These bold steps will finally put an end to these irresponsible and deceptive practices and protect Michiganders’ public health.”