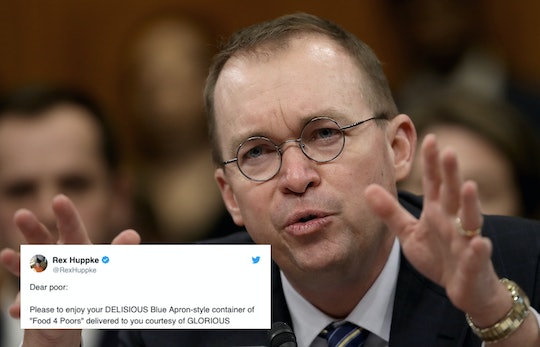 The Trump administration recently announced plans to overhaul the SNAP program by replacing food stamp funds with boxes of food that would be delivered to recipients' homes. Director of the Office of Management and Budget Mick Mulvaney compared SNAP food boxes to Blue Apron and Twitter is really pissed. Critics pointed out a number of flaws in the plan, including loss of food autonomy, food quality, and more.

The SNAP food boxes, referred to as “America’s Harvest Box,” are a part of Trump's 2019 budget blueprint and the proposal aims to replace cash benefits with boxes of food. The change would impact households receiving at least $90 a month in food stamps, which amounts to roughly 38 million Americans, or more than 80 percent of those enrolled in the SNAP program, according to CNN. Consumer advocates and food retailers alike have raised questions and concerns about the change to the program.

Many on Twitter also voiced their concern once Mulvaney stated that "part" of the benefits to food stamp recipients would "come in … a Blue Apron-type program where you actually receive the food instead of receive the cash." His comparison to the high quality food delivery company hit a nerve for those who think that the administration is out to hurt the poor, rather than improve their nutrition.

Many of the tweets about the program went after the GOP for failing to put the needs of the those dependent on food stamps — 45 percent of whom are children under 18, amounting to about 20 million kids — first.

Critics of the reform point out there there are a number of flaws in the logic. Some raised questions about how much money the changes would actually save, while others speculated that the suppliers of the included foods would receive unfair financial benefits.

Agriculture Secretary Sonny Perdue stated that the boxes would uphold "the same level of food value as SNAP participants currently receive," according to Fortune. Rather than a cut, Perdue described the reform as a “bold, innovative approach to providing nutritious food to people who need assistance feeding themselves and their families."

The proposal for the program explained that that it would "utilize a model similar to that currently used to distribute USDA Foods to other nutrition assistance programs." Rather than allowing families to choose how they spend their benefits in stores, the program would "provide staple, shelf-stable foods," according to CNBC. Those behind the program seem to think that it is a great idea. Suffice it to say that much of Twitter did not agree.

One of critics' chief concerns is the loss of agency for families in choosing what they eat. Multiple reports state that "America’s Harvest Box" would include "homegrown" products made and grown in America — but all of those products would be canned, according to CNN. As great as that sounds in theory, critics point out that these nonperishable foods are far from comparable to the fresh fruits, vegetables, and meats that come from Blue Apron.

Shelf-stable milk, juice, grains, cereals, pasta, peanut butter, beans, canned meat, poultry or fish, and canned fruit and vegetables are examples of what SNAP recipients could expect to find in their boxes, according to CNN. Forgive me if I don't find that list all that appetizing.

One user even included a helpful image of what an actual Blue Apron box includes for comparison. I don't see any powered milk there, do you?

Others offered comparison pictures of what one might find in a government supplied budget box. Ramen noodles anyone?

Receiving a standard set of foods could be particularly problematic for anyone with food allergies. Other dietary restrictions are also not taken into consideration, such as those who choose to eat kosher. This one-size-fits-all approach to nutrition is not realistic in a world where 15 million Americans have food allergies, including 5.9 million children under the age of 18, according to Food Allergy Research and Education.

The content of the boxes is problematic in another way, as Twitter user Jessica Ellis pointed out. Low-income households may not have the equipment necessary to prepare ingredients like dry beans. Instead, she offers the suggestion of allowing recipients to choose the foods that they receive.

There are many reasons why people would be upset by the proposed changes to SNAP. Millions of people across the U.S. rely on these benefits to feed their families and integral changes to the program are not something that should be taken lightly. Hopefully the Trump administration is hearing the complaints of the people and will take them into consideration.