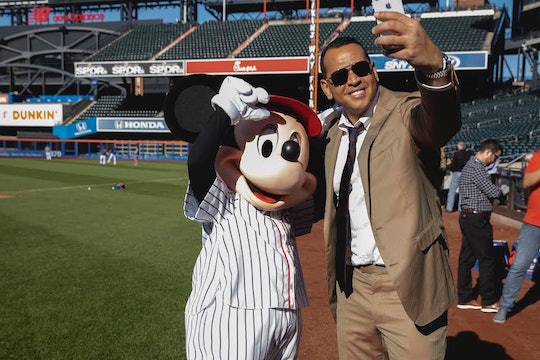 It's not every day you get to see one of Disney's biggest stars show off his athleticism. But on Sunday, showing up in full uniform on the pitcher’s mound at Citi Field in Queens, New York, fans got to see Mickey Mouse throw the first pitch at a Mets game. What's more, the beloved mouse also took a selfie with the one and only Alex Rodriguez.

Mickey Mouse took to the mound for Sunday’s game against the Dodgers and was able to spend a moment celebrating with Rodriguez, Jess Mendoza, and more players, according to BSC Kids. No word on what it’s like to pitch with those big costume gloves, but Mickey sure looked the part in a baseball uniform with a big “M” on the front.

A-Rod, a former Yankee and broadcaster for ESPN's Sunday Night Baseball, captured the moment for posterity with a selfie and posted it to his Twitter account. "Tonight’s starting pitcher...Mickey Mouse!" he captioned the shot, along with two laughing emojis.

Beyond supplying a bunch of smiles to the crowd, Mickey was also there to promote the newest season of the show previously known as Mickey and the Roadster Racers, which now has a new title: Mickey Mouse Mixed-Up Adventures. Mickey Mouse Mixed-Up Adventures will air on Disney Junior, Disney Channel, and DisneyNOW. Season 3 will debut on Oct. 14, so be sure to mark your calendars.

Mickey Mouse Mixed-Up Adventures' premiere will feature an updated version of the popular "Hot Dog!" song, along with the return of Mickey, Minnie, Goofy, Donald, Daisy and Pluto.

"The new season takes Mickey and the gang along with friends Chip & Dale on zany adventures all around Hot Dog Hills in fun locales including Mickey’s new gadget-filled house, the Mixed-Up Motor Lab at Mickey’s Garage and Minnie, Daisy and Cuckoo Loca’s Happy Helpers office," Disney previously shared in a press release. "Designed to impart lessons about friendship, teamwork and community, each episode features two 11-minute stories and mid-episode dance break in which Mickey and the gang invite viewers to dance along to the new Hot Dog! song."

Also on Oct. 14, a series of shorts called Hot Diggity-Dog Tales will debut on Disney Channel, Disney Junior, and DisneyNOW. It will feature Mickey and his BFF Pluto for a series of adventures.

Mickey Mouse and his buddies will also be featured in a live event called Disney Junior Holiday Party! On Tour, which kicks off on Nov. 1 in Scranton, Pennsylvania. Stops across the country will take the show on the road until Dec. 22 when it wraps up in Los Angeles. The event will feature holiday hits sung by favorite characters, geared toward the whole family. The website promises appearances from Mickey, Minnie, Goofy, Vampirina, Elena of Avalor, Sofia the First, Doc McStuffins, Puppy Dog Pals, and Fancy Nancy.

Whew! Mickey sure has been busy. Good thing he had the chance to take few moments for a fun break with the Mets this weekend.