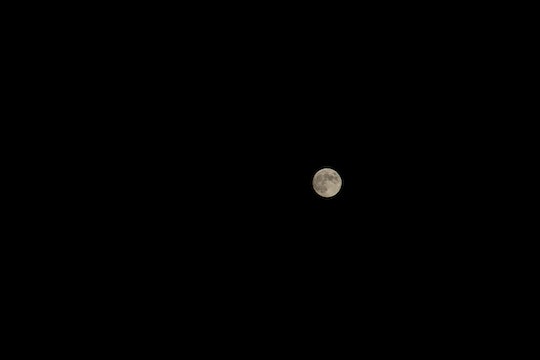 This weekend is going to be out of this world. A rare sight will be visible in our night sky, and moonwatchers are already preparing. There's a full moon on Friday the 13th, and it's unique not only for the date, but also for the size — you guys, there's a 2019 micromoon, and doesn't it sound like the cutest little thing you want to squeeze?

The Full Harvest Moon technically reaches its zenith just after midnight on Sept. 14, according to NASA, but the moon is celebrated on the entire night it is in its full glory. Although this moon's glory will be slightly less triumphant than in years past, because of where it is in its orbit. This year's Full Harvest Moon is happening when the moon is at its apogee, or the furthest place the moon travels from the earth on its elliptical journey, making it appear much smaller, categorizing it as a "micromoon." (The point where the moon is closest to the earth is called the perigee, also known as the "supermoon.")

Perhaps its tiny size will ward off any potential mishaps from the full moon happening on Friday the 13th, a rare occurrence that hasn't happened since the year 2000, and one that won't happen again until 2049. Because all that I'm hearing in my head is the "ch ch ch ah ah ah" soundtrack that followed Jason Voorhees as he macheted his way through all of the promiscuous teenagers of Camp Crystal Lake.

Traditionally, the Full Harvest Moon is the moon that happens during the peak of harvest season, and allows farmers to work long into the night by its glowing presence, according to the Farmer's Almanac. My question is — do the farmers get to take a night off this season because the moon will be underperforming? Or, because we live in a modern age with big honking lights available, do farmers just work all the time regardless of the natural light, and we hold onto the names of the moon just for fun?

Whatever may come in the light of the micromoon, does it matter that it might be a little dimmer than a normal full moon? It doesn't mean you can't bask in its glow, and feel the warmth of it down to your soul. Full moons are cool all on their own, and this one feels especially significant for some reason. Maybe it's all the hype, maybe it's the cute name, but the feeling is there. And seems to be growing.

The lore around full moons is legendary. Having married a cop, and being raised by an emergency room nurse, I can tell you that there is nary a wild night that happens wherein someone does not say, "must be a full moon," or "is it a full moon, or something?" In fact, the superstition is so prevalent that the last time the full moon happened on Friday the 13th, scientists decided to put together a little study history to see if it is all hogwash, or perhaps, the worst case scenario.

Spoiler alert: it turns out that there wasn't an real difference between the full moon on Friday the 13th, or pretty much any other day, which if you ask me, is very disappointing. I want something out of the ordinary to occur. I don't want anyone to get hurt, but maybe the world's dogs could howl more, or bartenders could accidentally pour too much wine in everyone's first glass when there's a full moon. Something fun. Alas, it's just a phase of the moon on a day of the week, the only thing making it special is that it's itty bitty this year. Bummer.