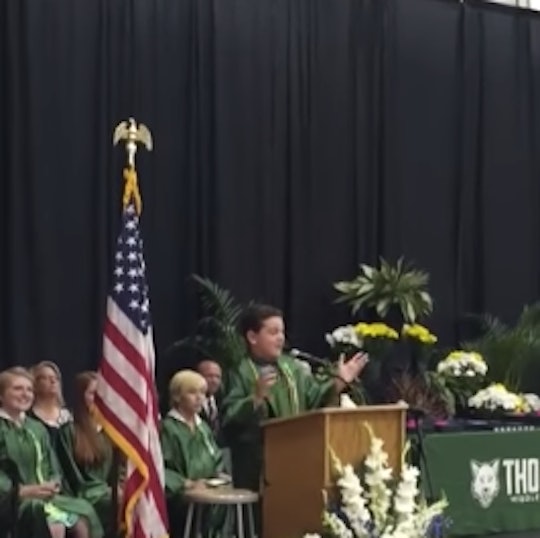 Middle Schooler Does An Impression Of The Presidential Candidates & Nails It

If there's one good thing to come out of this rather messy election season, it's the opportunity for comedy. One Chicago middle schooler, Jack Aiello, recently decided to capitalize on that opportunity during his eighth grade graduation speech, where he took on the mannerisms of the main players in this year's primaries one by one. Aiello's impression of the presidential candidates was spot-on, and made for a much more entertaining graduation than usual. Luckily for those who weren't in attendance at Thomas Middle School's graduation, Aiello's father later uploaded the video to YouTube, where it quickly lifted off into viral fame.

A week before graduation, Thomas Middle School's principal, Brian Kaye, had 20 student finalists compete for the role of class speaker at the event. Aiello was a clear winner with his self-proclaimed "presidential graduation speech." During his eight minutes at the podium, he took on the voices of Republican frontrunner Donald Trump (because how could you not?), Texas Sen. Ted Cruz, Democratic frontrunner Hillary Clinton, and Vermont Sen. Bernie Sanders.

Somehow, Aiello managed to keep the focus of his speech on complimenting his school and teachers, while still keeping the audience in stitches with his impersonations. When taking on Trump, for example, Aiello intoned:

The video of Aiello's presidential graduation speech, posted by his father on YouTube, has already racked up over 800,000 views, along with many encouraging comments from viewers (and hey, considering the usual YouTube comments, that's saying something). Kaye told TODAY that he was blown away by Aiello's speech, saying:

He never put anyone down. It was completely positive, which impressed me. He just used their mannerisms and movements and voices to talk about the school and his class. I knew he was going to bring the house down. ... His parents have allowed him to get engaged with that and watch the shows and everything, and I'm sure right now he's beyond excited about what's happened.

And bring the house down he did — Aiello received an immediate standing ovation from the laughing crowd. Judging by his successful speech and the comments left on the corresponding YouTube video, Aiello definitely has a future in comedy, and judging by the virality of his video, he might even have a talk show appearance lined up in the near future.

See? Election season's not all bad: Sometimes the world even gets a surprising new comedian out of it all.