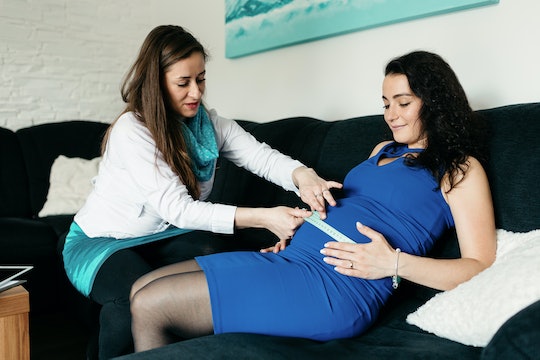 States That Embrace Midwives Have Healthier Moms & Babies, According To Science

A lot of pregnant people and parents can attest to the power of a good midwife or doula. And according to a new study, midwives are making moms and babies healthier in some states where midwives are integrated into health care systems. That's wonderful news for moms everywhere, because the more we can all work toward better outcomes for moms and babies, the better.

A recent study published in PLOS One, a multidisciplinary Open Access journal published by the Public Library of Science, found that states that worked the most to integrate midwives into their health care systems, such as Washington, New Mexico, and Oregon, "have some of the best outcomes for mothers and babies," according to Seacoast Online/The Portsmouth Herald. By comparison, in states with "poor integration of midwives across birth sites," like North Carolina and Alabama, "childbearing women are at increased risk for poor outcomes and experience reduced access to high quality maternity care," the study reported.

States with more restrictive midwife laws and practices — such as Alabama, Ohio, and Mississippi — seem to do "significantly worse on key indicators of maternal and neonatal well-being," according to Seacoast Online. This could be encouraging news for midwife and doula advocates, who sometimes face stigma, according to Psychology Today, or for moms who might consider turning to a midwife for their birth.

The PLOS One study analysis showed that states that supported greater integration of midwives into the health system were associated with a greater number of midwives and midwife-attended births, which makes sense. But more importantly, the study found that that greater integration was strongly associated with positive results like "higher rates of spontaneous vaginal birth, VBAC [vaginal birth after Cesarean], and breastfeeding at birth and at six months," in addition to "lower rates of obstetric interventions, preterm birth, low birth weight infants, and neonatal death." Those are all results that every state and every person working on health policy should want to see more of.

Dr. Tim Fisher, one of the authors of the study and an obstetrician/gynecologist at Dartmouth-Hitchcock Medical Center, told Seacoast Online:

We used a scoring system to determine the rate at which midwifery was integrated into an area’s health services...What we found is that where it is well integrated, the outcomes for mother and baby tend to be better. We looked at factors like whether they operated as an independent practice, if they relied on Medicare for reimbursements, if they had easy access to physicians, and if the births took place in the home, at a birth center or in a hospital.

So it sounds like the researchers were especially thorough with their analysis to account for impacting factors on the results.

According to Fisher, states were ranked on a scale of 1-50, and Northern New England rated particularly well. Washington did the best on the overall ranking, while North Carolina was at the bottom of the list.

It's important for women to be aware of their birth options, and what their state will allow when it comes to midwifery practice. The number of babies delivered by midwives is on the rise in the United States, according to Parents, and this study is a pretty major sign that allowing and regulating the practice, but not restricting it too much, might mean better outcomes for moms and babies. Many midwives practice in hospitals, and CPMs (certified professional midwives) have to be accredited through exams by the North American Registry of Midwives, so they are certainly trained in their field and aren't just for hippie or crunchy moms, as some stereotypes may suggest.

I think it makes sense that when women have more options when it comes to birth, they might feel that they have more support when considering all their choices, like VBAC and breastfeeding options. And the results of this study clearly show that states that are more supportive of midwives in general also see boosts in maternal and infant health, which is certainly good news, and something that health care policymakers should maybe consider more seriously in the future.

More Like This
A C-Section Actually Doesn't Take As Long As You Think, According To Experts
Everything You Need To Know About Postpartum Blood Clots
All Your Questions About Getting Pregnant After A Tummy Tuck Answered
All The Reasons Why You Might Have A C-Section