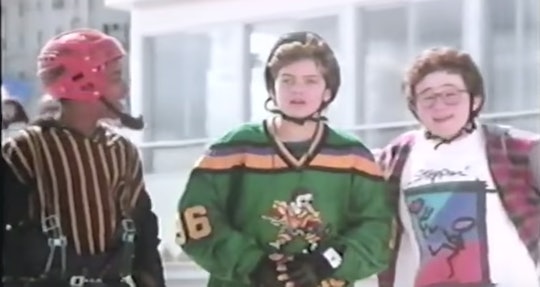 Lizzie McGuire, The Lion King, Blue's Clues, Full House, Gossip Girl — they're all getting a reboot, and that's just the tip of the iceberg. So let's go ahead and add the Mighty Ducks reboot TV show on Disney+ to the list, which sounds very, very exciting and, TBH, is sure to deliver some serious nostalgia... bless.

The fact that something new involving The Mighty Ducks is in the works isn't exactly breaking news. It was reported last year that ABC Signature Studios was in early development on a TV series inspired by the popular 1992 Disney movie, according to The Hollywood Reporter. The big news is that, now, we finally know where we'll be able to watch the series. Discussing Film reported the Mighty Ducks reboot series will release on Disney+, with production to begin this coming February in Vancouver, British Columbia. It's actually happening, you guys! This is real life.

OK, so the deets, if you will. The upcoming series will center on a 13-year-old boy who gets kicked off the junior division Mighty Ducks team, according to Discussing Film. As a result, and naturally, his mom decides to start their own team. This plot line is obviously a bit different from that of the original Mighty Ducks film, during which a lawyer named Gordon Bombay (Emilio Estevez) is arrested for drunk driving and sentenced to coaching a youth hockey team as community service. But hey, you can't recreate that kind of OG Mighty Ducks magic twice, my friends!

It doesn't look like there are many details regarding who will be starring in the Mighty Ducks reboot. But plenty of Twitter users are hoping that Emilio Estevez will be reprising his role as Coach Bombay. "BRING ME BOMBAY," one Twitter user declared.

Other are just thrilled about the upcoming series, regardless of who will be starring in it. One Twitter user wrote, "This is all I ever wanted fr. Like if it sucks it sucks but the fact that there’s a chance I get more mighty ducks that’s good is all I can ask for."

Another person pointed out my first concern about the series' plot line. "That is a horrible plot," they tweeted "If she starts her own team then why would it be called Mighty Ducks!" (My thoughts, exactly.)

Yet another Twitter user made another good point, writing, "The Mighty Ducks was about inclusion and pulling together. This idea of starting a reboot in which they kick someone out is missing the theme."

There is something that gives me hope for the quality of this particular reboot. Steven Brill — the original screenwriter for the movie trilogy — along with original producer Jordan Kerner will be working on the Mighty Ducks TV series, according to Disinsider. Josh Goldsmith, Cathy Yuspa, George Heller, and Brad Petrigala will be executive producing as well.`

I already have a subscription to Disney+, and I'm so pumped to introduce my kids to more old Disney movies and TV shows starting Nov. 12. And now I'm even more excited a whole new generation — along with their parents — will get to experience the magic of Mighty Ducks, too. "The Quack Attack is back, Jack!"