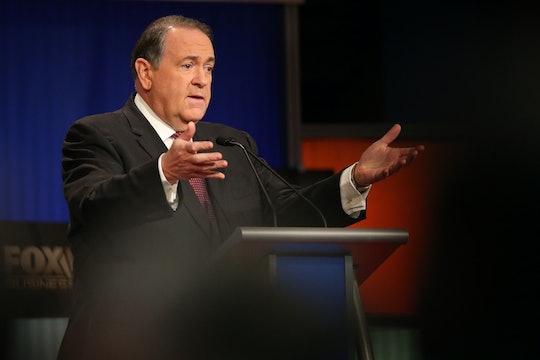 Former Arkansas Gov. Mike Huckabee officially suspended his campaign after the Iowa caucuses on Monday night. He announced the move on Twitter and thanked his supporters after receiving low poll numbers in Iowa, the state he had won in 2008. Only last night, Huckabee said he would remain in the race. "I'm not getting out of the race. I’m staying in and I’m going to do great tomorrow night and keep going and win the White House," he told his followers at a movie theatre in West Des Moines, according to The Des Moines Register. After coming in with a low 2 percent in Iowa, however, he bowed out of the race.

Huckabee did, however, have a pretty solid opinion on the Iowa caucuses back in December. "Historically, we've always said there are three tickets out of Iowa: you have to come in number one, two or three," Huckabee said during a radio interview, according to CBS. "If you're a distant third, then maybe there's not a way to go on. I think you have a good, hard look at it after Iowa." While the Iowa caucuses only predict about 50 percent of those who go on to secure the nomination for their party, it does tend to reveal candidates who have poor support early on in the voting season.

It's a painful move, but Huckabee knows when to drop out of the fight. Twitter weighed in on his announcement:

Another one bites the dust...