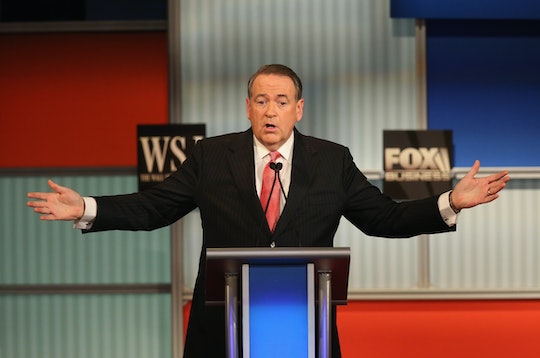 The kiddie-table version of the GOP debate held few surprises for viewers. With its predictable formatting, previously established candidates, and lack of spontaneous combustion, audiences were forced to listen to what the candidates were actually saying rather than finding entertainment through props. (It's the one time I missed Trump!) GOP presidential  hopeful Mike Huckabee's sexist comment about Janet Yellen managed to glean a round of mixed applause. Huckabee tried to simultaneously rib both his wife and Federal Reserve Chair, Janet Yellen, but unsurprisingly failed.

"My wife's name is Janet," Huckabee responded, when asked if he'd keep Janet Yellen. He then added, "And when you say Janet yellin', I'm very familiar with what you mean."

While bringing in a candidate's wife to serve a punchline is nothing new in the GOP debates, this particular comment felt particularly uncomfortable. Not only was Huckabee offering up his wife as a nag and using that comparison as a way to characterize the Federal Reserve, but he got laughs doing it. At the end of the clip, you can hear the crowd laugh along with the jab as well as several bouts of clapping. Like, are we serious right now?

Look, I'd love to laugh along and think that the men intent on running the country have a right to diss their wives, but I'd just really like to remind everyone that it's 2015 and maybe women are allowed to be defined by something more than their husband's amusement.

Here's the clip in case you missed it:

And Twitter reacted. From Tweets that go for the joke:

To ones that acknowledge the agony:

To ones that object to the delivery:

To ones that actually focused on what came after the joke:

We look forward to bringing you continuing coverage of men's ongoing attempts to learn whether or not there is ever an appropriate way to make sexist jokes about women, in front of women, where a national audience can hear and see you.